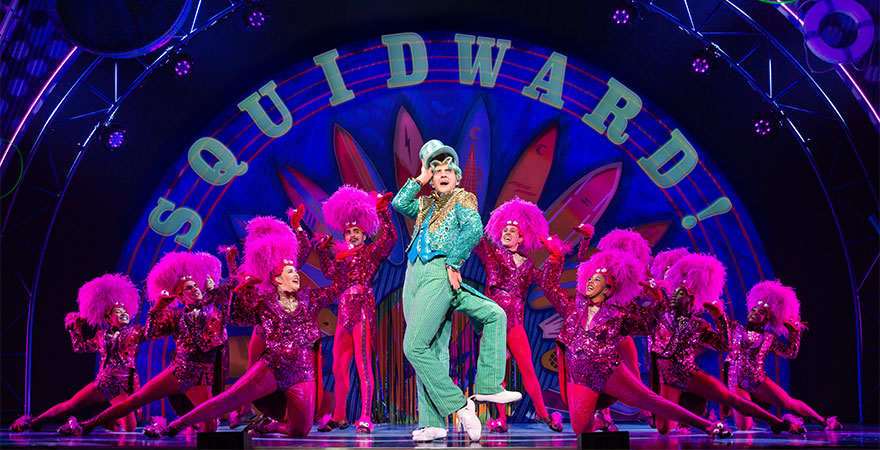 SpongeBob’s ideas of kindness and altruism have spread to an audience larger than just children. When it came time for director Tina Landau to develop a musical score for the hit Broadway show The SpongeBob Musical, she had searched for artists that would be the best fit for each song. Opposite from what she had expected, Landau received an overwhelming response from not one, but several Grammy® Award-winning artists including Aerosmith’s Steven Tyler and Joe Perry, John Legend, Panic! At The Disco, Sara Bareilles, and more. Together, the crew of the musical and these renowned songwriters collaborated to form 16 original pieces, while adapting two additional songs—one from David Bowie and the other from songwriter Andy Paley and the voice of SpongeBob on the TV show, Tom Kenny.

Why would the crew arrange a music score with this amount of different artists? They wanted to, and were seeking to be different. This musical is special because the directors want to preserve the original key and style of each songwriter, not simply take the words and ditch the framework. Tom Kitt—the show’s musical supervisor—mentioned in a 2017 interview with Stephen Daw from Rolling Stone magazine that, “I very much wanted to make sure that the intention of the composition was really present…As all of these layers of musical theater were being applied, it was important to make sure that the artists’ voices were front and center.”

Book writer Kyle Jarrow offered his insight into the composition of the musical score. After penning his 20-page outline, he—along with Landau, Kitt, and the rest of the crew—determined where songs were needed, how the songs needed to portray the scenes, and who they thought would be the best artists to form each tune.

Jarrow explains in a 2018 interview with Ruthie Fierberg from Playbill magazine that, “Even though the artists weren’t always in the room with us, we tried to keep an organic dialogue going.” By remaining transparent, the directors of the musical were able to retain their promise of keeping the authenticity of the individual artists’ songs and sound intact.

The partnership and teamwork used to weave the songs into the musical were akin to SpongeBob’s own motto of spreading unwavering optimism to all. This led to the creation of several amazing numbers including “BFF” by the Plain White T’s (for SpongeBob and Patrick), “Tomorrow Is” by The Flaming Lips (for all of Bikini Bottom), and “I’m Not a Loser” by They Might Be Giants (for Squidward). Each song contributes to the emotion of each scene, extending the storyline to another level.

With an overarching message of kindness and hope, Kitt was not surprised by the positive turnout the show’s musical search received. Be sure to make it your best day ever when The SpongeBob Musical brings its joy and optimism to State Theatre New Jersey between Friday, November 29 through  Sunday, December 1, 2019.