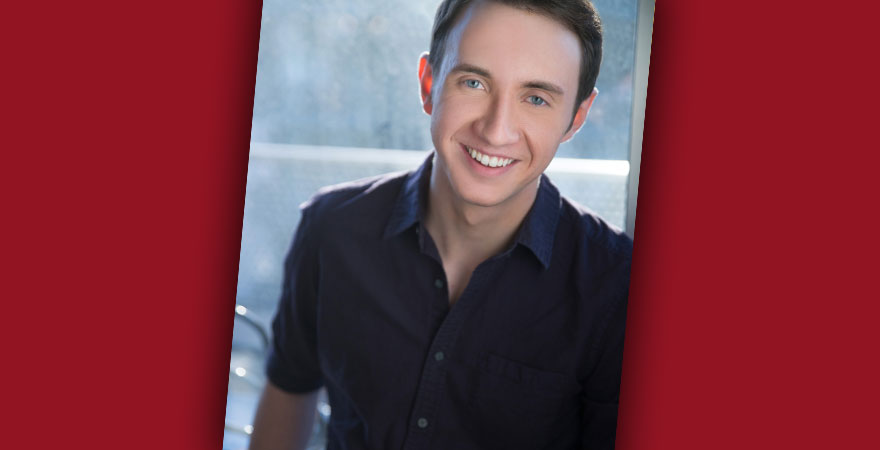 With Kelly from All Access and special guest Cody Cooley from The SpongeBob Musical!

Kelly: And welcome to All Access with State Theatre New Jersey, the show that takes you behind the scenes and behind the curtain of the legendary State Theatre in downtown New Brunswick. I'm Kelly Blithe your host, and Broadway is very big here at State Theatre. We bring in national tours all throughout the year as part of our 2019/2020 Broadway series. And as you know we kicked it off recently, and coming soon to the State Theatre this Thanksgiving weekend November 29th through December 1st is The SpongeBob Musical. And we are so very excited it's going to be a busy weekend, there's going to be a ton of activity, and we're looking forward to so much fun! And with us today is one of the actors from The SpongeBob Musical, Cody Cooley. Welcome Cody!

Cody: Hey how are ya?

Kelly: Good! So Cody, tell us all about the role you play and how great it is to be in something as great as The SpongeBob Musical!

Cody: So I play Squidward Q. Tentacles in The SpongeBob Musical, and we have such a blast every night. We've been traveling now for about two and a half/three months and we're just so excited to bring it to so many people across America.

Kelly: Yeah you do seem to be having fun. I talked to your castmate Lorenzo recently who plays SpongeBob, and he was saying how it does kind of seem like, because I've been following social media, and it kind of seems like you guys are having a party every night on the road. [Laughs]

Cody: We are, we really are. I mean our audiences are so fun, and the fans are so loyal to SpongeBob and the musical as a whole. It's really fun to bring it to so many people.

Kelly: So tell us about how you came to be part of this tour? What guided you and led you to this role?

Cody: Sure. So I auditioned in New York, that's most of our stories. I sent in some video footage and slides and whatnot and they brought me in and hired me, and luckily enough we got to rehearse for three weeks up in Long Island City, and we've been on the road.

Kelly: And I have to bring this up. You graduated from Rider University right here in New Jersey!

Cody: I did. I graduated from Rider University with a B.A. in acting.

Cody: So it will be fun to bring it back and see some professors and some friends in the area.

Kelly: That's super exciting. We always love when someone has a New Jersey connection coming to New Jersey for sure. So, tell us about your role as Squidward. Did you find that you could relate at all to Squidward or you had to completely find that character for you?

Cody: No, I definitely relate to Squidward. Squidward is right up my alley. I'm more of a pessimist than an optimist I would say. But it's fun being the grouchy kind of blase character. Again, you know Lorenzo, SpongeBob, is so happy and Squidward is just ready to rain on his party all of the time.

Cody: [Laughs] Yeah, no it's a lot of fun. I get to wear a double set of legs in the show and I do a big tap number which is so worth it, for the character let alone the audience. The audience loves it. And yeah it's a blast to be the sarcastic grouch I guess.

Cody: Sure. So we normally, everyday is really different. If it's a travel day we're pretty much up early, packing, making sure we're on the bus on time or getting to the airport on time. But if it's part of the show week, we sometimes will have a sound check, sometimes will have a 'put in' which is when if anybody has to go out for any reason either for sickness or an injury or anything like that we'll come to the theater early and step through the show. Just to make sure everyone's OK, everyone's going to be safe. But you know a typical day, yeah I would wake up and go to the gym and warm up and go to the theater. So, yeah not that exciting. Pretty routine by now.

Kelly: Yeah, yeah pretty regimented. So when you were preparing for your role for this musical, now I know you were asked not to kind of do an imitation of Squidward but to do your own take on it, so what did you have to do? Did you do a little bit of going back and watching the television show?

Cody: Yeah so when I got the contract I went back and watched the first three seasons of the show to kind of study what the comedy style is, more or less what the voice is. Again, we're not doing like a carbon copy of what the voices are but I try to bring as much as I can from the cartoon world and marry it with my own. But yeah I did some research on how he walks, how he talks, how he stands, what his relationships are to the other characters. So yeah that was fun I can't believe that was part of my job.

Kelly: [Laughs] Well I also know that costumes and obviously sets are really just kind of elaborate and some of the stuff to create the bikini body is just hilarious the amount of things they've kind of turned into other things, and the set pieces and the costumes are just fantastic. Tell us about the set and the costumes.

Cody: Yeah I mean the set is amazing. It's a little bit different from the Broadway set but it still has the same feel of sound objects, things like trash cans, things like pool noodles, dodge balls, and you know it's things you wouldn't expect to be what they are and then you realize "Oh that's a trashcan" or "That's a oil drum", you know things like that. And it's the same with the costumes. There are costume pieces where, we have a mermaid who her tail is made out of rubber gloves. And we have a costume, one of the characters is named Bubbles, and her costume is like little ornament balls that are clear. And you wouldn't expect it but it's really fascinating to see everything kind of have a double use in the show. It's very cool which stays true to the cartoon because you know in the cartoon all of the houses in the city of Bikini Bottom are car mufflers which is very funny.

Kelly: Now when you've been on the road now, I think it's kind of an all ages show. Do you see that as you're touring?

Cody: Oh yeah totally we've seen all ages. Really all ages. We've seen people young, we've seen people old enjoy this show as much as the people who grew up with it which is amazing to see. Because everyone has the connotation of "Oh I don't know if this worth it. What is The SpongeBob Musical? What does this mean for me, should I come see it?" And everyone walks out of it loving it because at its core its a musical and it really works for everyone. Everyone will find something to love.

Kelly: Awesome we are talking to Cody Cooley who plays Squidward in The SpongeBob Musical coming to the State Theatre Friday, November 29th and Sunday, December 1st. Now that is Thanksgiving weekend. So Cody, you're kind of spending your Thanksgiving with folks in New Jersey. For you, that must be awesome!

Cody: That is true yeah. It'll be pretty fun.

Kelly: And going back you mentioned learning to tap dance with your four legs. So I'm thinking about that and I'm like wait a minute, how does that work? Are you able to tell us a little bit how that happens?

Cody: Yeah so I had the luxury of working with the legs all throughout rehearsal process. When we were setting the show in New York City. So I was able to kind of figure out how to tap with four tap shoes on and I would run by number most times twice a day so that I could build up some stamina and really understand the mechanics of everything. But, yeah it's not as hard as it looks. But it certainly took a learning curve because it's different that obviously tapping with only two feet.

Kelly: Right. That had to be surreal at times because you know when you graduated from Rider University were you like "Man, I can't wait to tap on four legs!"

Cody: Yeah no I never expected. Until I saw the show on Broadway back in 2018 I think it was, probably last year, that's not even a possibility, what is this, you know? But, no it's unbelievable it's really cool to be able to do that every night.

Kelly: And I don't know how much you can give away but the music is just amazing. Its songs from Sara Bareilles and Cyndi Lauper.

Cody: Oh yeah. The artists that have worked on this, unbelievable. People like Plain White T's, They Might Be Giants, John Legend. No, the score is great. You would think it would be absolute chaos because there are so many artists working and they're writing their specific styles, but the director Tina Landau, she sent them what she wanted the theme of the song to be that they were writing, what the moment in the show was going to be. And pretty much what you hear in the show is what their original melody at least was that they sent back.

Cody: And it all works under the musical direction of Tom Kitt who really brings out the orchestrations and really really punctuates things.

Kelly: Yeah some really big players on this show for sure. And you know, so you're big solo the big tap dance number, can you tell us who that song is written by?

Cody: Yeah that was written by They Might Be Giants.

Cody: And it is a classic Broadway number. It is the most 30's and 40's tap number you've ever seen.

Cody: Yeah I can't wait to be back.

Kelly: Great and we'll see you in November!

Cody: Awesome see ya then!