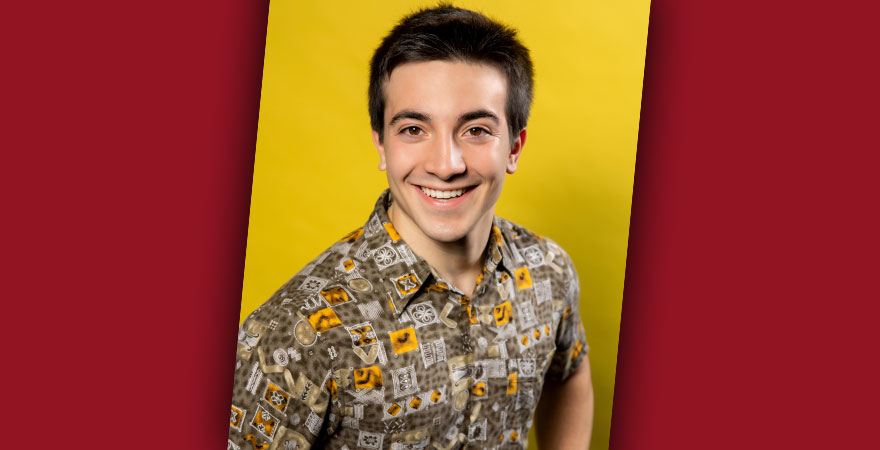 We had the exciting chance to speak with Lorenzo Pugliese who plays SpongeBob SquarePants in The SpongeBob Musical! Lorenzo chats about his feelings on playing the iconic and beloved character on stage, the star-studded music produced for the show, and more! Don't miss The SpongeBob Musical on November 29-December  1.

Lorenzo Pugliese: How you doing?

Kelly: Good, good! So Lorenzo, this is so exciting. You get to play one of the most iconic characters of all time! How does that feel?

Lorenzo: Yeah, it's a dream come true, it really is. It feels like I won the lottery, haha.

Kelly: Haha, so tell us about how you ended up in this role, and what path did you take to get here?

Lorenzo: Yeah, so, it all I guess started probably, I guess the seed was planted long ago, when I was a young boy watching the show. I actually used to wake up in the morning sometimes and I'd open up the window and I'd yell "Good morning world, and all who inhabit it!" which is like, one of his very iconic lines and actually my first line in the show now, which is kind of a really cool full circle moment.

Lorenzo: And then fast forward many years to college, I was approached by one of my good friends who told me about The SpongeBob Musical, that it was a new show coming out, and that in a couple years, he said that I was gonna be SpongeBob and that I was perfect for it. And I told him he was crazy, I had no idea what he was talking about! Haha but then, two and a half years later, they announced the open call for the tour, and a bunch of my friends were like very insistent on telling me that I should go. And finally, I broke down and went, even though I didn't think I had a chance. And yeah, so I went to the open call, I got a callback, and then I had about eight more callbacks over the course of like two and a half months, and then I got the call in May!

Kelly: Wow, wow. So this is fresh out of college?

Lorenzo: Yeah, yeah. I got the call about a week after I graduated.

Kelly: Wow! How is that for timing? And so, basically, it's been a whirlwind since, huh?

Lorenzo: Yeah, yeah, it really has been.

Kelly: So, tell us about The SpongeBob Musical. Obviously people know the character from the cartoon, but this is something different, this is definitely a one-of-a-kind musical event. So tell us how they bring Bikini Bottom to life and your role in that.

Lorenzo: I mean, of course, you know it's SpongeBob the Musical so fans of the show are gonna be transported into the super iconic Bikini Bottom. But it's also its own thing. It's a new story, with a brand new score and I mean the score itself is incredible. There's like, a countless amount of Grammy Award® winning musicians that wrote songs for the show. I mean, Yolanda Adams, Cyndi Lauper, Brendon Urie, John Legend, Plain White T's, the list goes on and on. It's crazy. And the story itself, I guess I'll just give you a little synopsis without giving away anything.

Lorenzo: So, you're introduced to Bikini Bottom and it's just kind of a normal day, until it is announced that this long-standing dormant volcano of doom is set to erupt the following evening. And so this kind of widespread panic takes over the town and the story kind of follows how different citizens of Bikini Bottom react and how people try to stop it. And of course, someone has to step up and try to save the day.

Kelly: Nice! Now you had mentioned that obviously SpongeBob you're familiar with, and you would wake up and say a SpongeBob line, but what did you do to prepare for this role? Did you actually go back and watch some of the old shows to kind of get in character?

Lorenzo: I did! I did watch some of the old show. Something cool about this show is that our director Tina Landau didn't want us to be carbon copies of the animated characters. She was very insistent on bringing some human aspects and kind of grounding them in truth. And so, while I did go back and watch a good amount of episodes, most of what prepared me for the role was just Tina's brilliant direction. I mean, like, the amount of time and effort that she has put into this show really is very apparent.

Kelly: Yeah, sure, sure, I mean she's a visionary director. Just to have her, just the name, and you hear the name Tina Landau and think, I've gotta see this show! And it's, yeah, of course, of course. You know, what do you think you relate to SpongeBob? Like are there characteristics about SpongeBob that kind of are your characteristics?

Lorenzo: Definitely! A lot of people, like family and friends tell me that sometimes I can be annoyingly optimistic in the way that I look at things. Because a lot of times if something is not going the way that I want it to go or if something is not going the way that someone else wants it to go, I'll try to remind myself or try to remind them that there's still positive ways to look at it and positive ways to go about it. I think that that's a really important way to try to live your life.

Lorenzo: And I think that playing this character has made me even more optimistic! Haha

Lorenzo: It rubs off on you!

Kelly: That's not a bad thing to be, that's not a bad thing to be! We are talking about The SpongeBob Musical, happening at the State Theatre in downtown New Brunswick Friday, November 29th 8pm, Saturday, November 30th 2pm and 8pm, and Sunday, December 1st, at 2pm. Lorenzo, so, I mean, I gotta ask you about the dancing, right? It's a musical, there's obviously a lot of dancing, how are your dance skills? Did you have to do a lot of training, was this a lot of rehearsal to get everything? Because there's a lot of people onstage for some of these big numbers and that had to be a lot of time and effort put into that.

Lorenzo: Yes, well I mean, as you know our choreographer is Chris Gattelli, who is one of the greatest Broadway choreographers of all time. So being able to work with a living legend, it was pretty surreal. And I don't have to dance too much, luckily. I mean I can dance, I can dance, but the real dancers are everyone in the ensemble. They're incredible. I mean, they have like, some of the people in the ensemble have like 10, 15 quick changes, and they're going from dance to dance. But yeah, every dance is so intricately choreographed and is super, super challenging. Like I tried to just in my spare time learn a few of the dances with some of my cast mates and it is quite a challenge, haha!

Kelly: Haha, and tell us about some of your cast mates. Have you, I mean I know that in any tour there's quick friendships made. Do you actually get along with Squidward, or you know, some of the other folks?

Lorenzo: Haha, yeah, yeah! I'd say that, you know we've only been together for what is it, three months? But the entire cast just feels like one big family. It's crazy. And it's also funny because in a lot of ways our friendship does have a kind of similar dynamic, but besides the little bit of hatred, me and Plankton, Tristan McIntyre get along really well, we're actually rooming together now! So SpongeBob and Plankton rooming together, you wouldn't see that in the cartoon!

Lorenzo: Or maybe you would. It'd be pretty funny!

Lorenzo: Yeah, it definitely feels like that. I mean, that's a good way to describe the show as well. Yeah, you know, it's kind of a big party.

Lorenzo: Everyone always leaves, you know, bright eyed, and we have that after-show glow.

Lorenzo: Yeah, yeah, well I learned recently about myself that I get a little sick when I'm flying.

Lorenzo: Yeah, you know that feeling when you've been on too many roller coasters?

Lorenzo: That's the feeling I get. It's not great, but you know, I'll sit next to some friends and we'll chat and it'll distract me. We play some airplane games, haha!

Kelly: Haha, so you're learning to deal?

Lorenzo: Yeah, definitely. And it's also fun to like, you know, go to different restaurants at all the airports and stuff.

Lorenzo: One thing about this cast that is super funny is that we all really love to eat!

Kelly: Nice! We are talking about The SpongeBob Musical, coming to the State Theatre Thanksgiving weekend, Friday, November 29th through Sunday, December 1st. You can get your tickets at STNJ.org. Lorenzo, thank you, and before you go, if people are thinking about seeing the show, what's the one little thing you'd tell them that's why they should see the show?

Lorenzo: You should come see the show because I promise you it will defy your expectations and you will leave there so happy that you came.

Kelly: Awesome. Well thank you Lorenzo, we look forward to seeing you as SpongeBob in The SpongeBob Musical and can't wait for you to come to New Jersey!

Lorenzo: Thank you, I also have to give a quick shoutout to my girlfriend who lives in East Brunswick, so I'm very excited to go over there and see her!

Kelly: Awesome, well we can't wait to see you guys and the cast of The SpongeBob Musical, so shoutout to your girlfriend! Alright, we have more coming up on All Access.