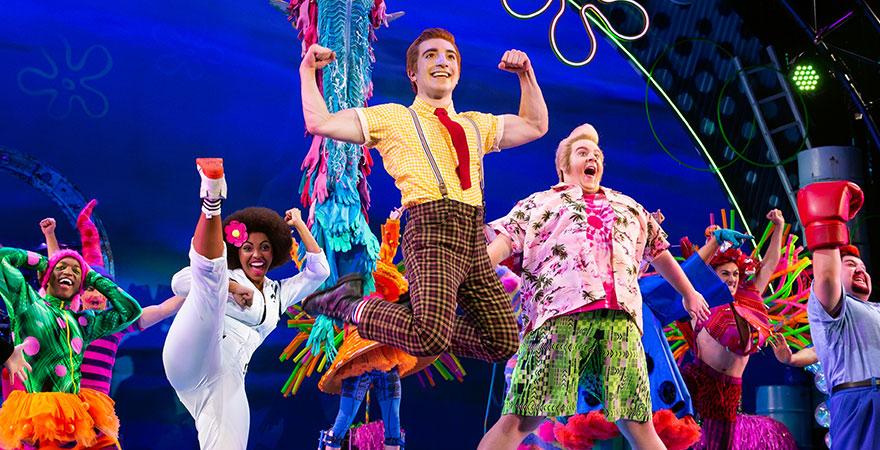 Everyone’s favorite sponge is coming to State Theatre New Jersey from Friday, November 29 until Sunday, December 1 in The SpongeBob Musical. In this undersea adventure, SpongeBob and his gang of friends work together to stop their town, Bikini Bottom, from being endangered by a nearby volcano eruption. Along the way, SpongeBob’s infamous positivity and innocence shines through to create a character the audience is bound to love.

SpongeBob is a character that always sees the best in everyone around him, and finds happiness in most everything he does. Although he is not the smartest character out of the bunch, what he lacks in brains he more than makes up for with his heart and compassion. SpongeBob is very competitive when it comes to his job as a fry cook, especially when others underestimate him. He is a tough competitor and will give his all in competitions to prove himself to everyone. At the end of the day it does not take much to SpongeBob happy; being surrounded by his friends, his pet snail Gary, and the Krusty Krab is all he could ever need.

The quirky yellow sponge’s optimism has magnified into a worldwide obsession. In its first month on air, the show overtook Pokemon as the highest ratest Saturday morning TV series, and as of late 2017, the media franchise has generated $13 billion in purchasing revenue for Nickelodeon. Why is it that this character has been received with such an outpouring of love? The New York Times’ critic Joyce Millman wrote, "His relentless good cheer would be irritating if he weren't so darned lovable and his world so excellently strange...like Pee-wee's Playhouse, SpongeBob joyfully dances on the fine line between childhood and adulthood, guilelessness and camp, the warped and the sweet." Celebrities have even expressed their support for the square shaped character. In 2007 Barak Obama admitted that SpongeBob is his favorite character and “the show I watch with my daughters.” When SpongeBob creator Stephen Hillenburg passed in 2018, diehard fans expressed outrage over the fact that the song “Sweet Victory” was played as a tribute inside the stadium, but not during the game itself.

In a world of sometimes dark and serious characters, it is SpongeBob’s constant joy, excitement, and happiness throughout the show that has made him so famous. Compared to all of his other friends like Squidward who is infamous for his pessimism; Patrick who lacks common sense; Plankton who is always trying to sabotage the Krusty Krab; and Mr. Krabs who is a penny pincher, SpongeBob is the only character who is actually happy. The other characters have some type of negativity in their personalities that force the audience to look to SpongeBob for any sort of positivity. Without the different traits of the supporting characters, the audience would not get to appreciate the innocence and naivety that is SpongeBob.

Get ready for an evening of smiles at State Theatre New Jersey with SpongeBob and his friends from Friday, November 29 until Sunday, December 1.