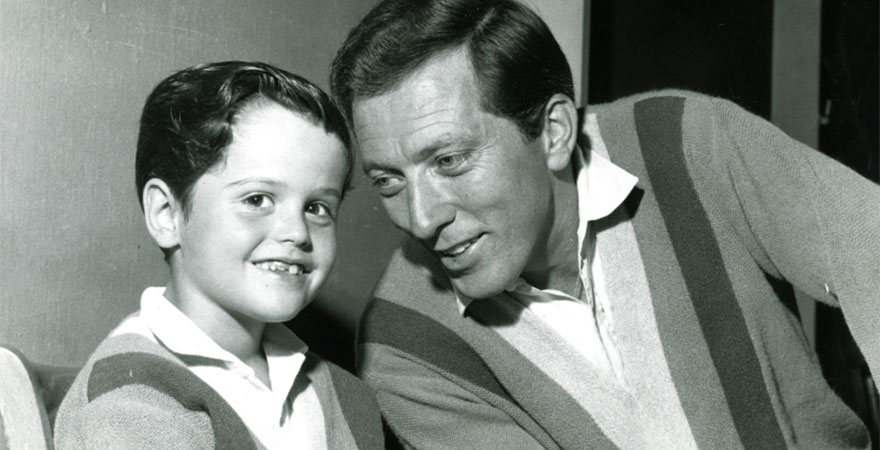 Oh, what a night it will be on Tuesday, December 3 and Wednesday, December 4, when the Broadway hit Jersey Boys takes the stage at State Theatre New Jersey. Although December of 1963 is most known for the song by The Four Seasons, there were many important events from the month in entertainment that set the stage for years of groundbreaking releases.

On December 10, 1963, Donny Osmond made his singing debut on The Andy Williams Show, one day after his sixth birthday. This performance was his first time singing with his brothers’ band, The Osmond Brothers, and it marked his official entrance into the family band. In 1989, his single release song “Soldier of Love” reached number two on the Billboard Hot 100 list. Osmond's  since has been nominated for eight awards for his work on his television game shows and his solo music. Eight days later on December 18, 1963, The Pink Panther film premiered in the United States. This was the original version of Pink Panther directed by Blake Edwards, starring Peter Sellers and David Niven, which went on to receive nine award nominations and won a 2010 spot in the National Film Preservation Board. There have also been multiple remakes of this movie; both live action and animation versions featuring stars like Beyoncé, Steve Martin, and Kristin Chenoweth .

On Christmas day of 1963, Walt Disney released its animated movie The Sword in the Stone which was nominated for an Academy® Award and won Best Picture for the Whole Family in January 1964. This film tells the story of a boy named Arthur who befriends a wizard named Merlin to learn the power of kindness, love, intelligence and bravery  . The following day on December 26, 1963, The Beatles released their hit songs “I Want to Hold Your Hand” and “I Saw Her Standing There” in the U.S.. “I Want to Hold Your Hand” paved the way for the rest of the Beatle’s American success; the song sold 750,000 copies in its first three days with 10,000 copies being sold every hour in New York City. Starting on January 18, 1964, “I Want to Hold Your Hand” began its 15 week top chart run, being at first for seven weeks starting on February 1. The rapid success of this song by The Beatles started the introduction of other British bands into America, including The Rolling Stones, The Knits, The Hollies, and Herman’s Hermits.

On December 29, 1963, the 31st National Football League (NFL) Championship game was played at Wrigley Field in Chicago, Illinois. The Chicago Bears and New York Giants battled for the title in temperatures less than 10 °F; the Bears came out on top with a final score of 14-10 . New Year’s Eve marks the last day of 1963, but the first day that Jerry Garcia and Bob Weir played music together. The two guitarists met by chance when Weir wandered into a music store in Palo Alto where he found Garcia playing a banjo  . The duo went on to form an acoustic band named Mother McCree’s Uptown Jug Champions, which eventually became The Grateful Dead. The Grateful Dead  went on to receive a Grammy® Lifetime Achievement Award in 2007, in addition to 82 songs and albums that reached the Billboard 200 .

December 1963 was jam packed with famous artists and bands getting the start of their careers; all of which are not directly discussed in the musical Jersey Boys. Now that you know some of the most important entertainment events from this month, you are ready to see Jersey Boys at State Theatre on December 3 and 4!