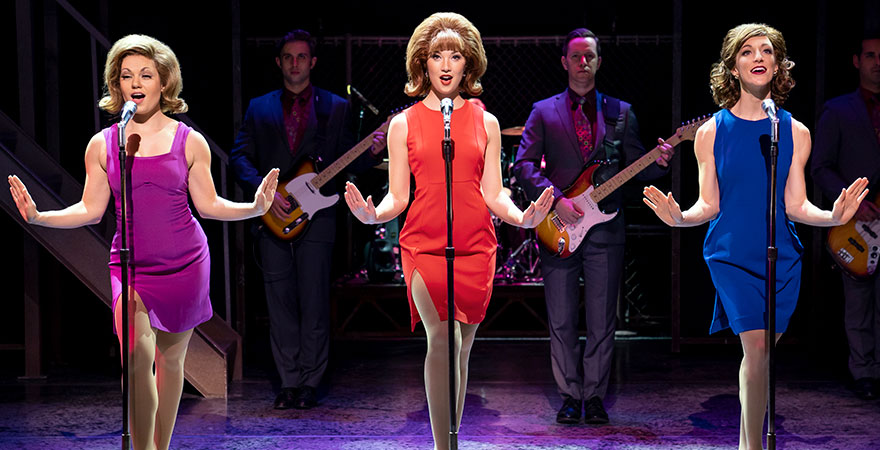 According the Next Big Sound—leading New York-based music analyst company—less than 10 percent of all music artists “make it big” in the end. When these four guys from New Jersey began singing in different joints around Newark, they had no idea what would come next. Frankie Valli and The Four Seasons produced a sound that turned the rock and roll genre on its head when they formed the group back in the 1960s. Their spectacular on-stage performance that highlights their angelic harmonies has romanced hearts all over the world for more than 50 years. Since 2005, their story has been told through the hit Broadway musical Jersey Boys. The Tony® and Grammy® Award-winning show blends their iconic music with the authentic style and clothing of the era that are personified by vibrant colors.

Jess Goldstein is the costume designer who brought the 1960s to life in Jersey Boys. His designs include the Four Seasons’ iconic red jackets and the bright, timely dresses that perfectly stitch together both the music and the look of Frankie Valli’s group to tell the story of their lives. He began his studies at the Yale School of Drama (1978), and then furthered his education at Boston University's School of Fine Arts (2007). During this time, he also became a professor at Yale, teaching theater design—now for the past 30 years. Goldstein is also known for his work with On the Town, Disney's Newsies, The Merchant Of Venice, Henry IV, The Most Happy Fella, The Apple Tree, The Homecoming, Tintypes, Enchanted April, and Julius Caesar. 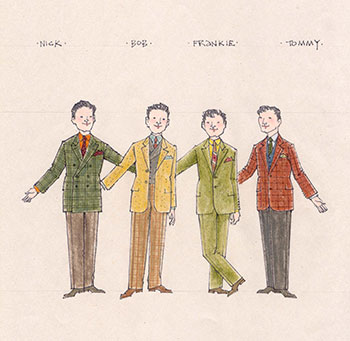 In 2002, he decided to work on a small, low-budget play called Monster at Classic Stage Company as a chance to collaborate with a new director. Here, he met set designer Robert Brill. After the show was over, Brill offered Goldstein the opportunity to do costume design for director Des McAnuff at La Jolla Playhouse in California for another show called Tartuffe. McAnuff’s next production was Jersey Boys. Goldstein credits this opening to his time at Classic Stage Company, for if he did not work on those shows, he would not have met McAnuff. In an interview with Howard Sherman—writer and editor of Stage Directions, an online theatre blog—in 2018, he comments on his lucky outcome, stating, “One thing just leads to another thing in such a fateful way in the theater.”

His sketches for Jersey Boys are penned with fine ink and colored pencil on newsprint paper. From here, he was able to, as Goldstein said during the same Stage Directions interview, “…figure out how to create the constantly changing world within the play.” Since the costumes for Jersey Boys are not as elaborate or require as much structural integrity for dance numbers, there is less of a focus on the rhinestones and the sequins and more attention given to the clothing’s functionality during quick changes to accurately display the decade. 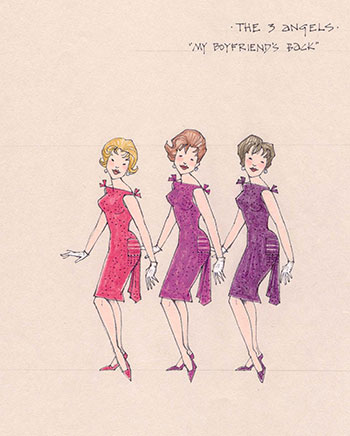 Goldstein has previously described costume designing as a form of expression with different color palettes for different numbers. He feels that shows do not have to use monotone layouts for the set or the costumes. There is a specific art in describing the mood of a show through colors that evokes emotion from the audience that cannot simply be done with words or through song.