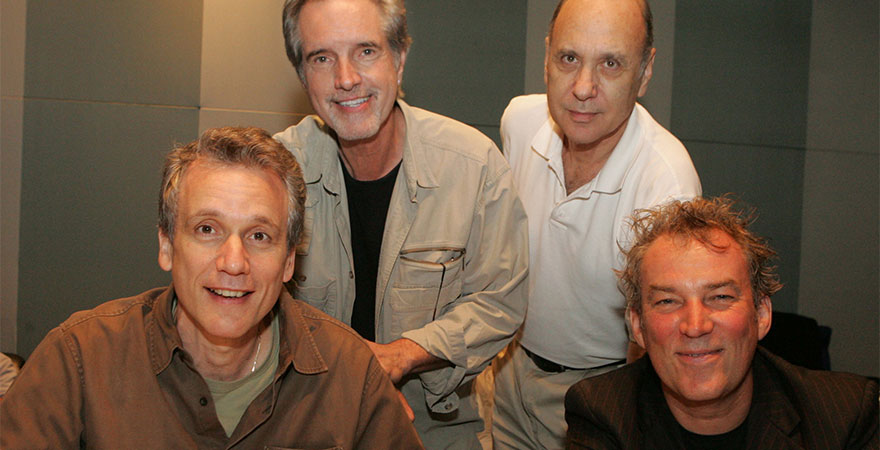 Marshall Brickman (Book) has written Sleeper, Annie Hall, Manhattan, Manhattan Murder Mystery, For the Boys, and Intersection. He has written or directed Simon, Lovesick, The Manhattan Project, and Sister Mary Explains It All. Brickman has also been involved with The Tonight Show With Johnny Carson as the head writer, and The Dick Cavett Show as head writer and co-producer. He has published in The New York Times, The New Yorker, Playboy,and other periodicals and was the 2006 recipient of the Writers Guild of America’s Ian McClellan Hunter Lifetime Achievement Award. Jersey Boys, his first venture into musical theatre, won four Tonys® including Best Musical. The Addams Family, his second Broadway venture (with co-author Rick Elice), played on both national and international tours.

Rick Elice (Book) was the co-writer of Jersey Boys and winner of 2006 Tony® Award, 2007 Grammy® Award, and 2009 Olivier Award for Best Musical with Marshall Brickman. His play, Peter and the Starcatcher, received nine 2012 Tony® Award nominations (including two for Elice), and won five, more than any play of the season. Also on Broadway, Elice wrote The Addams Family (with Marshall Brickman, music and lyrics by Andrew Lippa), toured North America, with productions in Europe and South Africa. In 2014, The Old Globe Theater in San Diego presented the world premiere of his musical, Dog and Pony (music and lyrics by Michael Patrick Walker). Elice is currently writing a musical for Disney Theatricals with Benj Pasek and Justin Paul, based on the film Make Believe and Superfly (co-written with Seth Zvi Rosenfeld), directed and choreographed by modern dance legend, Bill T. Jones. Heartfelt thanks to those who work in the theater makes him grateful for the day he was born: Sondheim, Stoppard, Bennett, Prince, Fosse, Robins, Nichols, Tune, Nunn, Laurents, Stone, Kushner, Taymor, Papp, Schumacher, Schneider, Coyna, Brickman, Timbers, and Reese.

Bob Gaudio (Composer) wrote his first hit, “Who Wears Short Shorts,” at 15, for the Royal Teens, and then went on to become a founding member of the Four Seasons and the band’s principal songwriter. He also produced the hit, “You Don’t Bring Me Flowers” for Neil Diamond and Barbra Streisand (Grammy® nomination, Record of the Year) as well as six albums for Diamond, including The Jazz Singer. Other producing credits include albums for Frank Sinatra, Marvin Gaye, Diana Ross, Michael Jackson, and the soundtrack for the film of Little Shop of Horrors. Several songs co-written with Bob Crewe have been cover hits for such artists as the Tremeloes (“Silence is Golden”), the Walker Brothers (“The Sun Ain’t Gonna Shine Anymore”), and Lauryn Hill (“Can’t Take My Eyes Off You”). With his wife, Judy Parker, Gaudio produced and co-wrote the Who Loves You album for the Four Seasons and one of the Billboard’s longest-charted singles (54 weeks), “Oh, What a Night.” A high point in his career came in 1990 when, as a member of the original Four Seasons, Gaudio was introduced into the Rock and Roll Hall of Fame. In 1995, he was inducted into the Songwriters Hall of Fame, which hailed him as “a quintessential musicmaker.”

Bob Crewe (Lyricist). “New York was pregnant in the fifties,” says Bob Crewe, “gestating with possibilities.” Crewe and music partner Frank Slay became independent writer-producers when the category hadn’t yet been invented. In 1957, they wrote and produced “Silhouettes” for The Rays, which skyrocketed to #1. Suddenly, producers in demand, they launched Freddie Cannon’s “Tallahassee Lassie” and Billy & Lillie’s “Lah Dee Da.” Crewe’s 1960’s unprecedented producing success with The Four Seasons birthed a new sound, striking a major chord in American pop. “Sherry,” “Big Girls Don’t Cry,” “Walk Like a Man,” “Candy Girl,” “Ronnie”—all smashes! When lead Frankie Valli demanded a solo turn, Crewe and Bob Gaudio wrote (and Crewe produced) “Can’t Take My Eyes Off of You,” which eventually became the century’s fifth most-played song. Crewe ran hot with artists from Vicki Carr, Oliver and Lesley Gore to Mitch Ryder, co-writing with Charles Fox the soundtrack for Jane Fonda’s film Barbarella. Then his own Bob Crewe Generation exploded with “Music to Watch Girls By”. In 1972 Bob was in L.A., where he revived Frankie Valli with “My Eyes Adored You” by Crewe and Kenny Nolan. They also co-wrote Patti LaBelle’s “Lady Marmalade” (#1, July ’75), which was a hit again on the soundtrack of Moulin Rouge (#1, June ’01).

Richard Hester (Production Supervisor). Superior for all productions of Jersey Boys internationally (New York, both U.S. Tours, Las Vegas, London, Australia, and South Africa/Asia.) Broadway: Gypsy, Sweet Smell of Success, Cabaret, Annie Get Your Gun, Patti LuPone’s Matter of the Heart, A Delicate Balance, The Old Neighborhood, Titanic, The Phantom of the Opera, The Red Shoes, The Secret Garden. US National Tours of Wicked, The Phantom of the Opera, and West Side Story. The U.S. Regional tours of Jersey Boys (La Jolla Playhouse). 10 years with Patti LuPone on the road. Cofounder/ producer with Bernadette Peters and Mary Tyler Moore of Broadway Barks! an annual animal adoption event in NY since 1999.

Come sing along with the cast of Jersey Boys at State Theatre on December 3 and 4!