Straight No Chaser–A Cappella Group to Perform at State Theatre 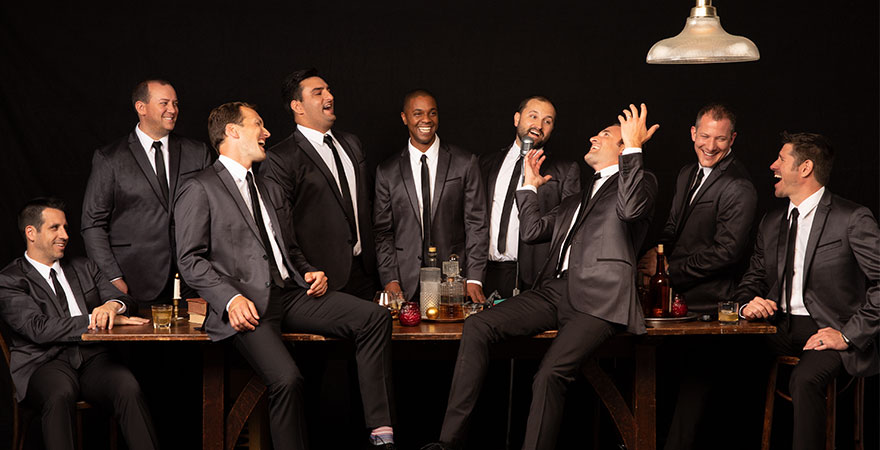 A cappella group Straight No Chaser will bring their unique sound to State Theatre New Jersey on September 19, 2021. The genesis for the group began in 1996 at Indiana University in Bloomington, IN.

They’ve shed their college days and now perform professionally. The university still has an a cappella group; however, they surrendered the name and are now referred to as Another Round. In 2006, band member Randy Stine posted a 1998 clip on YouTube of Straight No Chaser singing “The 12 Days of Christmas” and it went viral. Atlantic Records Chairman & CEO Craig Kallman saw it and contacted the group asking if they wanted to reunite and make an album—they obliged.

Their namesake is inspired by Thelonious Monk’s 1967 album and is also a reference to the Americanism phrase when requesting an alcoholic drink. They sing covers of classic pop and soul favorites with their own signature style. The State Theatre’s audience is in for a treat!

With over 1.6 million albums sold in the U.S. and more than 100 million YouTube views, they are popular. Their impeccable vocal harmonies are invigorating and to think they use only one instrument: the human voice. They made the most of an unexpected opportunity when they signed with Atlantic and released their first album HOLIDAY SPIRITS, in 2008.

Their most recent album One Shot was released in 2018. It includes Montell Jordan’s “This Is How We Do It,” Ricky Martin's “Livin' La Vida Loca,” Fleetwood Mac's “Go Your Own Way,” James Brown's “Papa's Got a Brand New Bag,” Percy Sledge's “When a Man Loves a Woman,” and Simon & Garfunkel's “Homeward Bound.”

Paul McCartney, Stevie Wonder, Elton John, and Dolly Parton are among their collaborators. They’ve performed on national TV shows Today and Late Night with Jimmy Fallon. Consistently ranked among Pollstar’s top 100 touring acts in North America, they have also toured Europe and Australia.  Commenting on their success, band member Jerome Collins said, “Now we’re 10 years still in the game, and we’re still a successful act. We started this just for fun and now we’re doing it as a career.”

I  viewed some of their video recordings including “Homeward Bound” and “Go Your Own Way.” They have verve and feel good vibes. “We’re going to ride this train. Each tour is something new, and we’re always surprised at the things we get to do,” according to band member Tyler Trepp. It seems as though the train will ride into ad infinitum, but first it will stop at State Theatre New Jersey on April 1 where the nonet is sure to deliver a great show!

Read more about Straight No Chaser, and their new label imprint with Warner Music Group.