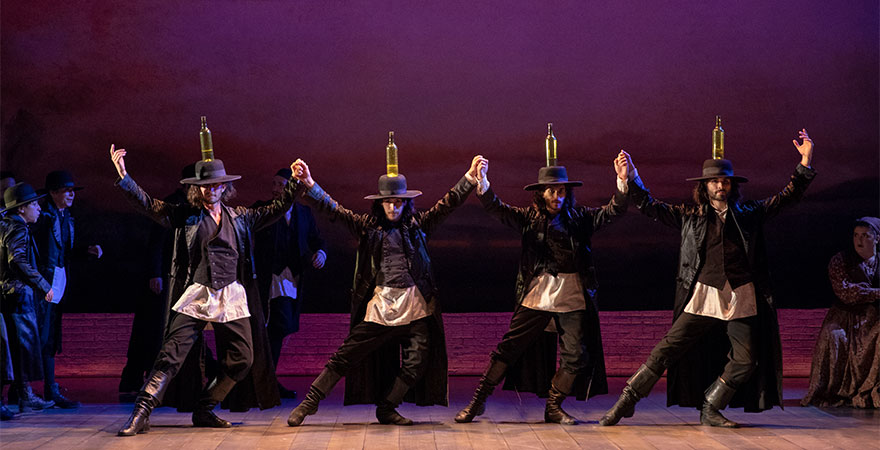 Jerome Robbins was knowledgeable in many styles of dance, choreographing a variety of pieces for Broadway shows, ballet productions, and everything in between. During his lifetime he won two Academy Awards for his work with West Side Story, four Tony® Awards, five Donaldson Awards, one Emmy® Award, and the Screen Director’s Guild Award.

In 1964 he was asked to choreograph Fiddler on the Roof, and he jumped at the opportunity. To accurately prepare for this job, he did a plethora of cultural research and attended many Jewish weddings. At one wedding he saw a man dancing while balancing a bottle on his head, which inspired the creation of the famous bottle dance. Robbins gave his all to Fiddler on the Roof, and his hard work is still being recognized today.

Since Robbins’ choreography was a perfect match for Fiddler on the Roof, the company Music Theater International (MTI), who owns the rights to the musical, wanted to preserve his incredible work. MTI made it a requirement for anyone who purchased the rights to the musical to recreate Robbins’ steps exactly as he did. The original cast and crew felt that the staging and dance moves from the production were an integral piece of the show that couldn’t be replaced; without them the show wouldn’t be the same. Any theater company that recreates Fiddler on the Roof receives a choreography guide from MTI that breaks down all of the character movement and steps, which must be replicated exactly as specified.  Fiddler on the Roof is one of only a few of MTI’s productions that has such specific requirements for recreation; not many other shows have such intricate and well thought out choreography like Fiddler.

When the Broadway revival of Fiddler on the Roof was first announced, MTI decided to give up the 50+ year old choreography and bring in someone new to help change it up. This was the first time in all of Fiddler on the Roof history that this has been allowed. The new choreographer selected was Hofesh Shechter,  an Israeli born and UK based choreographer with a specialty in folk dance. Shechter was the perfect choice for Fiddler on the Roof because he grew up surrounded by Jewish culture. He had an advantage over Robbins; he knew the traditions and customs that could be portrayed through choreography inside and out. Shechter's plan for the choreography was to re-vamp the brilliance made by Robbins and  “[bring] to life the energy and emotions of the period and the culture.”

The Broadway revival of Fiddler on the Roof featuring brand new choreography by Hofesh Shechter comes to State Theatre New Jersey December 20-December 22. Be sure to get tickets for the post show cast party on Friday December 20, for the opportunity to meet and converse with the cast and crew of the show!