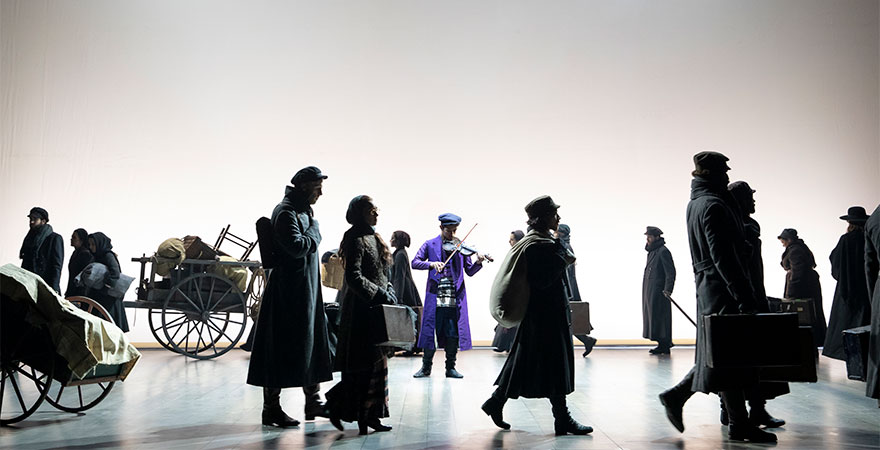 Learn what it was like to live in Russia the same time the characters in Fiddler on the Roof did before you come see the show yourself at State Theatre New Jersey December 20-22!

Living as a Russian Jew in the 19th and early 20th centuries was a challenge, but is remembered as a cultural phenomenon in history. Russian Jews were living in shtetls, which were small villages. The word “shtetl” is Yiddish and translates to “little town.” Shtetls were isolated from other vibrant towns and cities in Russia, as they were located on the western border of Russia. Russian Jews were ordered to live in these run-down areas by Catherine the Great in 1791 due to business competition and the increase of anti-Semitism. They became the home for Russian Jews and others for over a century.

Although shtetl means little town, history shows that hundreds and thousands of people could live in one shtetl together. Shtetls usually were made up of wooden houses, synagogues, study houses, a marketplace, and a Jewish cemetery. Because Russia was trying to drive out the Jews, some Christian churches could’ve also been found in shtetls. Shtetls were ran under a kahal, which means “community council." History also shows that Jews were not the only groups of people living in shtetls. Many non-Jews lived in shtetls, too. Because of this, no shtetl was a spitting image to another. Each shtetl was distinct in terms of dialect, politics, etc.

Czar Alexander III implemented the May Laws in 1882, which isolated Russian Jews even further. Under these laws, they were not allowed to live anywhere outside of shtetls and nearby towns. They also had to follow some Christian customs, such as closing businesses on Sundays and Christian holidays. This new law resulted in poverty and hunger amongst the Jewish community.

Although Russian Jews struggled daily, they turned to their faith to find the bright sides about living in shtetls. They thrived on tradition, charity, and family values. They were also able to form close-knit communities, where every neighbor appreciated each other. No matter how hard things got for Russian Jews, they never forgot who they were, where they came from, or who means the most to them.

If you were a Russian Jew living in a shtetl in the western border of 1900s Russia, you would be speaking the Yiddish language. It is believed that Yiddish originated in Germany when Jews migrated there, and then moved more eastward towards Central and Eastern Europe. A production of Fiddler on the Roof is currently running in New York City, where the entire production is performed in the Yiddish language.

Shtetls are no longer around today. The shtetls were destroyed in the Holocaust by the Nazis, but by that time, millions of Jews emigrated or converted to Christainity. However, Fiddler on the Roof keeps the legacy of shtetls alive for audience members to learn about the little towns and to indulge themselves into a completely different setting, and for some, a different religion. Here is a virtual map showing all of the shtetls that once existed to learn more!