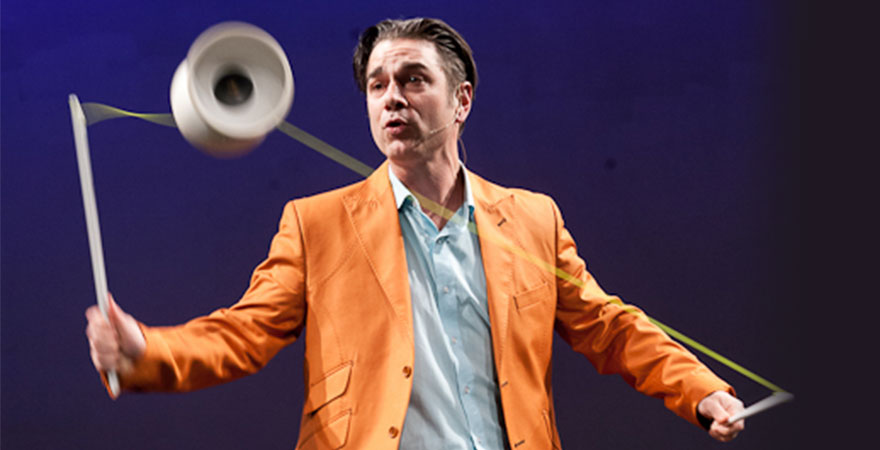 State Theatre New Jersey is presenting the wonderful Mr. Pennygaff's Cirkus Sideshow Spectacular as part of our Milk & Cookies series on January 11 at 10am and 12pm! We sat down with Mr. Pennygaff himself to discuss the style of the show, his long history in circus performing, and the wide variety of audiences he entertains!

Kelly: And we're back on All Access with State Theatre New Jersey. Now, every year we are very excited to bring the State Theatre's Milk & Cookies series back, in 2020, I guess you could say we're bringing it back. And we have a great lineup of performers coming to you for the spring, kind of, I guess you could say January's spring, right? That's what people say, right, Erik, haha?

Erik: Yeah, haha! It's starting to warm up, I mean, that's spring, right?

Kelly: With me, is Erik Stratton, marketing...what is your full title, Erik?

Erik: Honestly, I forget it all the time. I think it's Education and Community Engagement Manager? But I could be wrong.

Kelly: Oh, nice, nice. Well, Erik, we have a very special guest, one of the performers for Milk & Cookies, coming to us Saturday, January 11, at 10am and 12pm, Mr. Pennygaff! Welcome, Mr. Pennygaff!

Mr. Pennygaff: Oh, thank you so much! Good to be here!

Erik: So, what kind of show can we expect to see with Mr. Pennygaff's Cirkus Sideshow Spectacular?

Mr. Pennygaff: I would say it's a blend of circus and vaudeville. Good old classic American popular entertainment. Juggling, balancing objects, I do a classic for the older crowd Ed Sullivan style plate spinning act. For the younger crowd, just an amazing plate spinning act, since many of them probably don't know who that is anymore.

Erik: Haha, yeah! I mean, as one of the founders of the Bindlestiff Family Cirkus back in 1995, you've been mastering these circus arts and doing them since way before a lot of our audience even started seeing theatre!

Mr. Pennygaff: Or even existed, I would even say!

Erik: Haha, exactly! So how did you get started with circus entertainment?

Mr. Pennygaff: I mean, there were definitely a few moments in my youth that had major impact, of my family taking me to a mud show when I was probably nine or 10. A mud show is a traveling circus show that basically is in a tent and moves every day. And they were showcasing the elephant dog, for 25 cents you could pay and go behind the wall and meet the elephant dog. Which was pretty much just a shaved dog. That moment I realized you could shave a dog and make a living!

Mr. Pennygaff: That was definitely a part of what started me. My parents also gave me an Emmett Kelly ventriloquist doll. Emmett Kelly, for those who aren't familiar, was one of the most famous American clowns, definitely in the tramp tradition, due to silent clowns, so it was really kind of confusing when I look back, why you would create a ventriloquist doll with a silent clown. But it definitely got me into the idea. And then when I went to Hampshire College I learned how to juggle and eat fire. So when I left with my liberal arts degree, I had two marketable skills!

Erik: Haha, so how do you make the jump from juggling to eating fire? That seems like there's a couple of steps in between.

Mr. Pennygaff: Finding the right people to show you how, but many of these skills fall into a similar sort of world. Once you start hanging out with performers you start, especially in the circus world you know, you're meeting acrobats, you're meeting jugglers, aerialists, clowns, and then you just start kind of trading stunts and practicing with each other.

Erik: Well, speaking of stunts, do you have a favorite stunt that you do onstage?

Mr. Pennygaff: I have of number of stunts, most of my favorite ones, or some of them, I won't be performing there. I do a lot of what's called sideshow, which is sword swallowing and eating fire, and I always enjoy the reactions of such things as sword swallowing. But I would say of what I'm presenting in New Brunswick, the plate spinning act is one of my favorites just because it's a classic act that gets this amazing amount of energy and people really get behind bowl number one and bowl number two, and we're all screaming and I'm running back and forth keeping them spinning. Just really the energy that this classic old act brings to four-year-olds and to 84-year-olds is something that always makes me really happy and amazes me. It entertains such a broad age range.

Erik: So you'd say that the plate-spinning would definitely be the highlight for the shows to see?

Mr. Pennygaff: It's the finale, it's super high energy, everybody's screaming by that point. And just really getting behind what the act is.

Erik: That's really cool. I mean, look, circuses have been a huge part of America for such a long time. What's it like keeping this tradition alive and exposing these tricks and stunts for kids of today's age?

Mr. Pennygaff: Once you can get the parents to put away the cellphones and help a child how to watch live entertainment, I think it just naturally happens. The culture, I think we like watching other humans do amazing feats. And the moment you can take the screen away from that relationship just adds such a grander level to it. Even today we see you've got things like America's Got Talent and James Corden on televisions you're seeing many of these acts. And then you go to some of the larger shows and you see the grandness but you get to bring this entertainment on such an intimate level in situations like this. I think just naturally people love watching live entertainment and humans doing amazing feats.

Erik: Yeah, that's a great parallel. I never thought of the comparison between what James Corden does and what you guys do.

Mr. Pennygaff: I mean James has brought me onto his show to do stuff before.

Mr. Pennygaff: So there's a lot of crossover between what we do and television. But to me I think the important part is keeping it live, bringing an audience together, bringing a group of people together to experience something amazing.

Erik: Yeah, and speaking of amazing, working in such different venues must be so challenging and unique for your stunts. What's it like changing?

Mr. Pennygaff: And, the size of the show, too. I mean, with the State Theatre alone, I think this will be the third or maybe fourth production we've brought there over the years. I brought a much larger circus troupe on the bigger stage with a unicycle basketball troupe involved, and aerial acts, and we brought a three person smaller little circus show, and this round is me bringing it all solo!

Erik: Wow, that's awesome! How does the act, how do you think about what type of acts you'd want to bring to the venue based on its size?

Mr. Pennygaff: It's a mixture of looking at how big the stage is and what you can fit on the stage, what type of audience you're going to have, whether it's going to be family or all three-year-olds to six-year-olds or a nice range. I think a lot of the things I do one moment is something that the four-year-olds love and then every now and then I'll throw something in that gets the 12 to 14-year-olds to be like, "Wow, that was amazing!" So to me it's a mix of looking at the venue and also considering what will work for that audience.

Erik: You know, considering that, what do you want children and families to get out of the show?

Mr. Pennygaff: One of my favorite parts in the middle is I present what I call fun with everyday objects. And it's how to basically take things from around the house, the kitchen, the living room, and be able to do a trick with them. So, you know, I think it's kind of a take home that I don't like the idea of them coming, seeing circus and feeling like it's something completely out of everybody's reach. But to be able to say, "Hey, you can go home, take this sheet of newspaper, and do something amazing with it!" I think is a great gift to be able to give to an audience.

Erik: Yeah, and there's this great photo we have of you on our keynotes for the show of you balancing a bunch of wine glasses on a glass pane on your chin and it looks incredible!

Mr. Pennygaff: I take no responsibility for what they break once they go home.

Erik: So, for those kids who'd want to take your act home and do things on their own, what kind of advice would you have for aspiring circus performers?

Mr. Pennygaff: Practice every day, pretty much anything you can dream if you start putting 15 minutes a day working towards your dream, eventually you'll be able to do it. There's nothing that's really impossible. It just takes a lot of time and a lot of effort.

Erik: So what would you say to people who are undecided about attending this show right now, who have never seen anything with circus entertainment before?

Mr. Pennygaff: You're going to be amazed and you're going to have cookies. I mean, I can't think of a better combination, personally! Why anybody would want to just stay at home and watch television when they have that kind of opportunuty to go into a beautiful venue and to see a lot of their friends hopefully, and to then just be able to sit back and be amazed. I mean, to me it's not a choice.

Kelly: Yeah, I'm going to barge in and say I agree, live entertainment is where it's at! And we are talking with Mr. Pennygaff about the January 11th Milk & Cookies series returning in 2020, January 11th at 10am and 12pm, tickets are available at STNJ.org. Now, Mr. Pennygaff, your name is...Keith? Haha

Mr. Pennygaff: I'm Keith Nelson, I also go by Mr. Pennygaff, when I'm a silent clown it's Kinko the Clown, and some people just call me Mr. Bindlestiff.

Mr. Pennygaff: And when I'm teaching circus at SUNY Purchase, they call me Professor.

Kelly: Oh, wow! You do wear many hats, indeed! And if folks want to find more information about you, where can they follow you?

Mr. Pennygaff: Bindlestiff.org is Bindlestiff Family Cirkus's website, we are also very easy to find on all the social medias. And if they are looking for ticket information and show information, I guess go to the State Theatre NJ.org!

Kelly: Yay, awesome, alright! Well, thank you so much for being on All Access, and we're looking forward to seeing you on January 11th!

Mr. Pennygaff: My pleasure! And I look forward to seeing everybody in the audience!

Erik: Well, thank you so much for joining us, Keith. You have a good day now.