A Celebration of "The Mighty Zep" 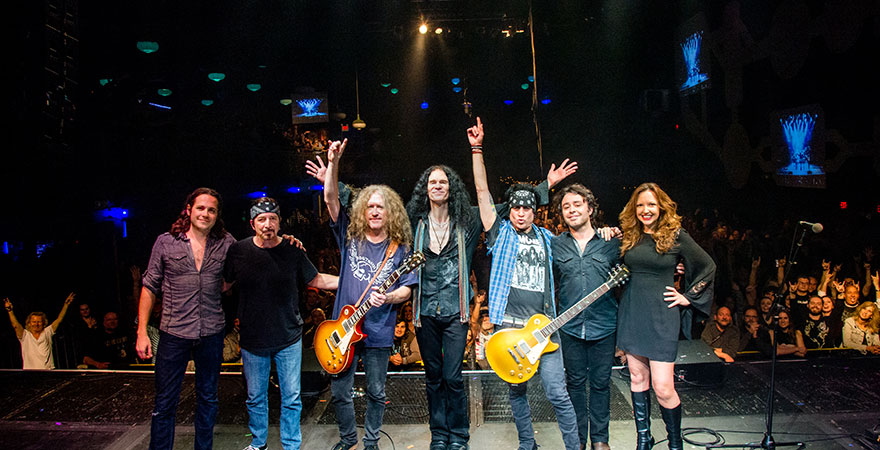 Not many people can say they’ve had the transcendental experience of attending a live Led Zeppelin concert. Although some lament the era of Zeppelin as long gone, there are six musicians keeping the music very much alive. Get The Led Out, coming to the State Theatre on February 21, 2020, prides themselves on capturing the electrifying essence of the recorded music of Led Zeppelin. They’ve mastered the art of delivering Led Zeppelin’s blues-soaked, groove-driven rock anthems with passion and fury.

Get The Led Out is intent on delivering Led Zeppelin exactly as it's heard on the albums. As written in a review of the band on TribLive, “…they do not consider themselves to be a ‘tribute band,’ per se, as they do not dress in costumes or impersonate the original Led Zeppelin members. It’s all about recreating the sound for them. Fans tell us that, if you were to close your eyes, you’d swear you were listening to the real thing, as the music is a replica of the albums.”

The iconic group of the 70s known for their heavy, guitar-driven sound are now celebrating their 50th anniversary. If you’re a Led Zeppelin superfan, you may think you know every detail of the band’s history, but there are some facts that even the greatest “Led Heads” have looked past.

Formation of Led Zeppelin
The rock legends we all know as Zeppelin were born out of an entirely different band, The New Yardbirds. The English rock band formed in 1963 is responsible for starting the careers of many notable musicians including Eric Clapton, Jeff Beck, and of course Zeppelin’s Jimmy Page. After playing in the band for two years as the lead guitarist, Page decided he wanted to pursue other artistic avenues. After gathering his bandmates Robert Plant, John Bonham, and John Paul Jones a new band was formed. Allegedly, The Who’s Keith Moon and John Entwistle had suggested that the new supergroup would go down like a “lead balloon,” which resulted in name “Lead Zeppelin.” The “E” was dropped as to not pronounce the name “Leed,” and Zeppelin replaced the word “balloon.”

Page had trouble nailing the “Stairway to Heaven” Guitar Solo
Bandmate John Paul Jones tried to help Page when he noticed his friend struggling to master the famous guitar solo. Page didn’t appreciate the help telling him “You’re making me paranoid!” The struggle was worth the effort. By most measures, it is the most-played song in the history of American FM radio and has sold more sheet music than any other rock song.

Get The Led Out celebrates “The Mighty Zep” through their accurate recreations of the classic rock songs. In addition to mastering the famous Zeppelin guitar riffs and melodies, the band makes sure their audience is always kept on their toes by changing up the set list each performance. Come and see for yourself which Zeppelin classics they’ll bring to life at the State Theatre on February 21, 2020!