Interview with the Cast of Dinosaur World Live! 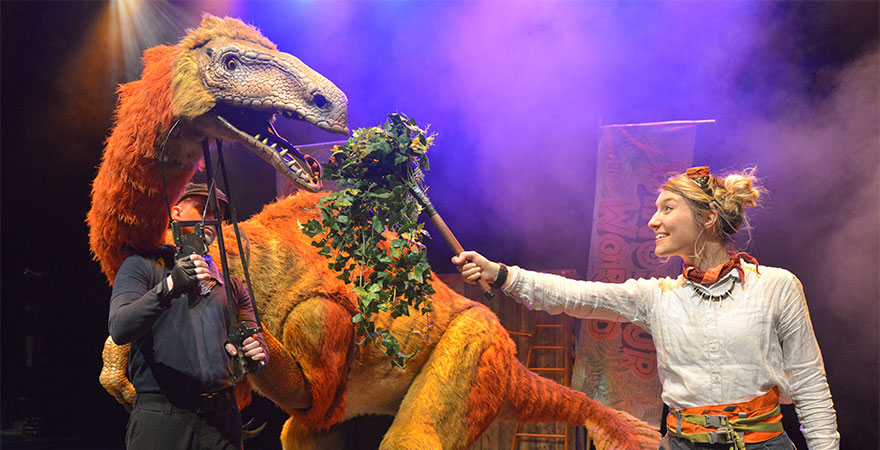 We had the great pleasure of speaking with three members of the Dinosaur World Live cast, Romina Hytten (Miranda), Darcy Collins (Puppeteer/Puppet Captain), and Ashleigh Cheadle (Puppeteer)! They shared what one might expect from this roar-some and interactive show, how they bring history to life, and what it's like to expose young audiences to something new and exciting! Dinosaur World Live is here for two shows on March 15 at 11am and 3pm.

with Kelly from All Access and special guests Romina Hytten, Darcy Collins, and Ashleigh Cheadle of Dinosaur World Live

Kelly: And, we are back on All Access with State Theatre New Jersey. I'm your host, Kelly Blithe, and we are so looking forward to this amazing, amazing performance of Dinosaur World Live!, or should I say performances because we have two on Sunday, March 15th, 11am and 3pm. You can get your tickets at STNJ.org, and with us today are the performers and puppeteers from Dinosaur World Live!. We have Romina, Ashleigh, and Darcy. Welcome ladies!

Kelly: Yes! So this is so exciting! This is an interactive show for the whole family, and you get to learn about the dinosaurs a little right? Of course the dinosaurs themselves are just amazing and it's an awe-inspiring natural history lesson that is just going to be an unforgettable adventure. So who wants to start? Romina, how about we start with you? Tell us about Dinosaur World Live!.

Romina: Hi! Okay, yes sure. So I play Miranda in the show who has grown up on an island with her parents who are paleontologists. And they have discovered dinosaurs that still exist on this island. So she's grown up her whole life with the dinosaurs, training them and everything. And she's now brought them over to America on a big ship to introduce to everyone. And so, it's sort of her little show that she puts on for everyone, introducing the dinosaurs, teaching them all the facts about each one. But obviously, with a whole load of real life dinosaurs, it can get a little bit out of hand, so some things do go wrong. But she tries to keep it under control and tries to keep the dinosaurs under control as much as she can. But yeah, they are sort of her best friends and she gets so excited to introduce them to all of the kids.

Kelly: Oh wow! And Ashleigh, can you tell us about some of the dinosaurs that will be featured?

Ashleigh: I can indeed. I might not give any too big clues away, but there are some big ones, some very, very small ones. A three-day-old Triceratops, who is absolutely adorable and I think there is a flying one, those are all the clues I will give you. But they are all life size and they all got lovely little personalities that I think all the parents will potentially recognize in some of their little ones, and yeah, I think that's enough of a tip there.

Kelly: [Laughs] Okay. Alright, I like it. And Darcy, bringing these to life, must be so exciting to see the audiences just go crazy with these big dinosaurs coming on stage. That sounds really super exciting. Tell us about that transformation of bringing those dinosaurs out.

Kelly: Now did any of you, as a kid, like dinosaurs? Were any of you like big dinosaur fans?

Kelly: For me, when you said Triceratops, that was my dinosaur. [Laughs] And I know that kids, they pick their favorites as well, and I think featuring them in this way, I'd love the lessons they are learning. It's this show, and you are following this story but you're really, at the same time, are learning some fun facts, and that's really cool. Did you guys learn some things as well being a part of this show?

Romina: Yes definitely. In the script, there's lots of great dinosaur facts that I had never heard of myself. And we had to do a lot of research and rehearsals as well and we all kind of geeked out on each choosing our own dinosaur and discovering little facts about that dinosaur. So yeah, it was really amazing for us, we are all like big kids on stage, like re-learning all of the stuff and the joys and the energy that the kids give us on the stage, and their joy, and their love for the dinosaurs. It really helps us keep going on the tour. We feed off of it.

Ashleigh: It's amazing how many facts Romina finds, it's a lot. After the show, interacting with the kids, they know so much about every dinosaur, and we probably learn as much from them as they learn from us it's lovely.

Ashleigh: I mean it's everything you want from a show right?

Kelly: I love it, I love it. Romina, when you are in character and you are interacting with the dinosaurs and you have the puppeteers there, there must be a lot of practice and rehearsal that goes into those steps because one wrong turn and bam, you are smushed into a dinosaur.

Romina: [Laughs] Haha yeah exactly. We did a lot of rehearsals back in the U.K. where we brought the show over from. We also toured around the U.K. so we all had a lot of practice by the time we've come out here. No, it's really nice, it is live and each show is really fun to just sort of pretend that I am really up their on stage with the dinosaurs and things and so yeah I don't fall off the stage to many times, they keep me quite running around my toes. It's good fun.

Kelly: [Laughs] So Darcy, I want to hear more about being a puppeteer, and being in a show like this, there's different sized puppets right? And some of these are really big, is that physically taxing on you?

Darcy: Yes, yeah it is. We have to make sure we warm up properly and we are looking after ourselves. So we all do a warm-up together on stage before the show and we also have a track system where each puppeteer doesn't do the same show twice. So say, for example, one show I might be on the head of all the dinosaurs operating the head, and then following show I might be on the feet or in the body. You never do the same thing twice, so you don't get any repetitive strain injuries, and things like that. So it's quite a clever system we got going on.

Ashleigh: Oooh. I think, so as Darcy says, we rely on tracks, so I think my favorite moment for me as a puppeteer, it depends on the kids we have up, obviously, but the closest interaction between puppet and kid for me is when I'm on a puppet called Orlando and I'm on the head and you just get such a beautiful interaction like to date, this little boy had a whole conservation with Orlando and started commenting on how sharp his teeth were. It's just wonderful to be that close to the kid and see their interaction with the dinosaur. That would be my moment.

Kelly: [Laughs] I love it, I love it. And we've been following your journey on social media and your tour and we are really excited to have those moments here at the State Theatre in New Brunswick, because it really does put smiles on all our faces when a show like this comes into town. We are talking about Dinosaur World Live! coming to the State Theatre, Sunday, March 15th, at 11am and 3pm. Make sure you get your tickets at STNJ.org. So ladies, before you go, everyone tell me one little thing about why people should come and see this show. Romina I'll will start with you.

Romina: I don't know if we mentioned this in the interview, but we have a dinosaur egg that about a year ago was laid and it might hatch during the show which is very very exciting.

Romina: So if you come, you might be able to see an egg hatch which is very very, very exciting.

Ashleigh: For me, you get to come, you get to shout out and express yourself while watching the most wondrous thing ever. It's not a sit down and be quiet environment, it's just expressing yourself and loving it, and having fun!

Kelly: Love it, love it! Darcy?

Darcy: Mine would probably be that once you are here and you met all of the dinosaurs, you'll get a chance at the end of the show to come and meet some of our dinosaurs and some of the babies and ones that are well-behaved. And you will get a chance after the show to meet Miranda, say hello, give them a little pet, and any dino facts that you want to tell us. We can't wait to meet everyone who comes! We are very excited.

Romina, Ashleigh, Darcy: Thank you so much! Thank you! 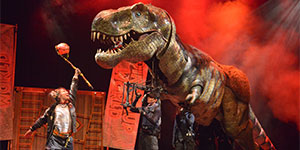