Get the Led Out–Philadelphia based band play the Mighty Zep 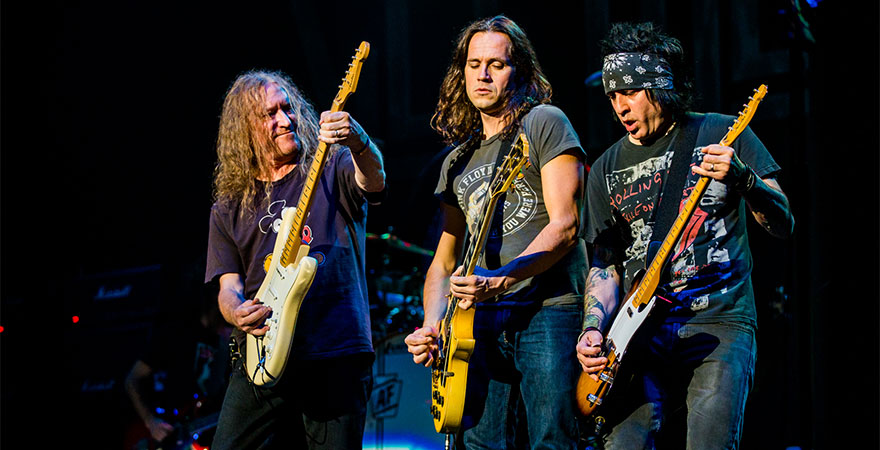 The Philadelphia based band Get the Led Out (GTLO) was in the house Feb 21. Playing to a packed State Theatre New Jersey, they shined brightly. Their show is known as a celebration of the “Mighty Zep.”

Dubbed by the media as ‘The American Led Zeppelin,’ the sextet has travelled across the country performing at major clubs and PAC venues. They’ve played at the State Theatre before and were happy to be back in New Brunswick.

They cover the range of Led Zeppelin’s music embodying everything from the bombastic to the epic to folky and mystical. They opened with “Immigrant Song” written by Robert Plant and inspired by a concert in Iceland. Followed by “Good Times and Bad Times.” The crowd was enthused and the band was warming up, ready to deliver a phenomenal show.

“Babe, I’m Going to Leave You,” soulful at first, then crescendos into a guitar jam. The drums were alive and well for “Moby Dick,” a jamming song; it brought back my childhood growing up when rock was a force to be reckoned with. My favorite songs of the evening were “Going to California”, “Stairway to Heaven,” and “Whole Lotta Love.”

Hearing a classic rock band’s music being performed decades after the genesis of the band is inspiring. The musicians looked like they were from that era with long hair and a 70s vibe infusing the atmosphere. The vocals, acoustic and electric guitars, mandolin, harmonica, percussion, and drums are the main instruments these talented musicians use to create a Led Zep experience.

They are currently on tour with dates booked through October, carrying the celebration across the nation. I am sure there are many fans awaiting their arrival. The encore included “Stairway to Heaven,” one of my all-time favorite rock songs; they played it perfectly.

Lead vocalist Paul Sinclair is quoted as saying “Led Zeppelin are sort of the classical composers of the rock era. I believe in 100 years from now they will be looked at as the Bach or Beethoven of our time. As cliché as it sounds, their music is timeless.” I think he might be on to something.