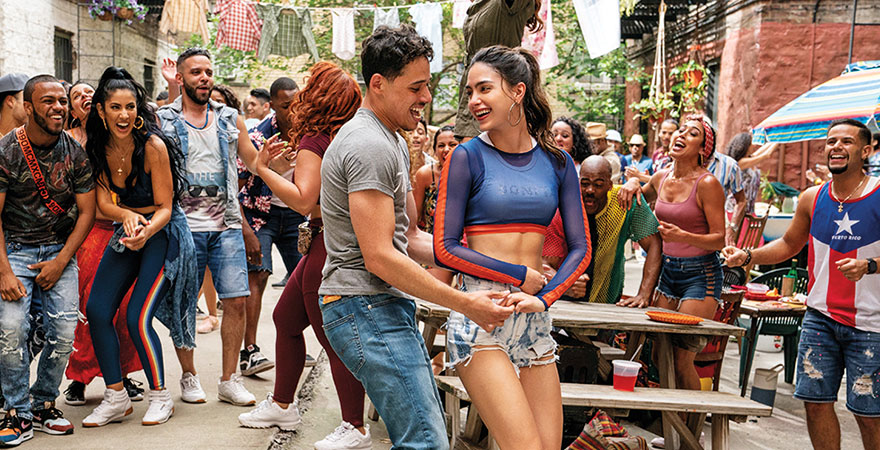 With a long line of movie musicals adapted from Broadway productions including Cats, Hairspray, and Les Miserables, there is hungry anticipation of what’s to come next from theatre fans everywhere. Many musicals are currently in the works of being transformed for the big screen and although you won’t see them for a year or two, these are some upcoming musical adaptations to look forward to.

In The Heights, based on the Tony® Award-winning production of the same name, is set to premiere June 18, 2021. The screenplay for this film is by Quiara Alegría Hudes with music and lyrics by Lin-Manuel Miranda. The story takes place over three summer days in Washington Heights, a predominantly Dominican and Puerto Rican-American community. The stage version first hit Broadway in 2008 and received a wave of praise from critics. Fans can expect to see the familiar face of Anthony Ramos, original cast member of Hamilton, as Usnavi—a role that Miranda originated during the musical’s stage run. Other lead roles include Corey Hawkins as Benny, Melissa Barrera as Vanessa, and Leslie Grace as Nina. Check out the amazing In The Heights official trailer!

Our next musical on the list has been around the block a couple of times and made it's Broadway premiere in 1957. The famous Romeo and Juliet inspired musical, West Side Story, is set to be released December 18, 2020. Directed by Steven Spielberg with music composed by David Newman and Leonard Bernstein, this movie gives a fresh coat of paint to the prior 1961 film adaptation that we’ve come to know and love. West Side Story follows the forbidden love of two teenagers from rival Puerto-Rican and White gangs set in the 1950s. The anticipation to see “Maria” performed by the leading man Ansel Elgort (Baby Driver and The Fault in Our Stars) as Tony has us on the edge of our seats. New Jersey's own Rachel Zegler is starring in her first feature film playing Maria. Rita Moreno, who won an Oscar® for best-supporting actress in 1962 for her portrayal of Anita in the original movie, will play Valentina, a character previously known as Doc. Get an inside look at West Side Story and some of the amazing shots from filming »

Our last story gave a new perspective on one of Shakespeare's most famous plays and this next musical gives a spin on the classic 1900 novel, The Wonderful Wizard of Oz. The wildly popular musical Wicked has had buzz surrounding it regarding a movie for seemingly forever but this past February, Universal Studios announced that a feature adaptation would be released December 22, 2021. Due to the coronavirus, production has been pushed back and the studio has not yet released an updated Wicked premiere date. Regardless this is set to be directed by Stephen Daldry with screenplay by Winnie Holzman. Composer Stephen Schwartz shared in an interview with Playbill that the new film will feature at least two new songs in the score, as fans shouldn’t expect an exact version of the stage production. The idea for a film adaptation has been in the works for some time now—read about the journey of the Wicked movie. No news has been released regarding casting yet but we know this film will be something magical.

The last musical on our list snaps us back into reality and is sure to be a tear-jerker on the big screen. The 2016 Broadway smash-hit Dear Evan Hansen is on its way to the cinema. The movie is set to be produced through the Universal-based Marc Platt Productions with director Stephen Chbosky (Beauty and The Beast and The Perks of Being a Wallflower). Fans can rest assure that music will be kept intact by Benji Pasek and Justin Paul, the composers for the original production. The story follows Evan Hansen, a high-schooler whose world gets caught up in a whirlwind of lies, while tackling subjects like teen depression and suicide. At the moment there is no official release date for the film but Ben Platt, who popularized the role of Evan Hansen in the original production, shared on The Tonight Show Starring Jimmy Fallon that he would reprise the role for the film. Recently, it was confirmed that Kaitlyn Dever (Booksmart) will star as love interest, Zoe Murphy; Julianne Moore as Ben's Mom; and Amy Adams has been cast as Cynthia Moore. Still in its early stages, Pasek, Paul, and Steven Levenson offer fans an update on the Dear Evan Hansen movie.

With all of these amazing shows set for film adaptations, our fingers are crossed that production will resume soon and we can enjoy these musicals in a whole new way!