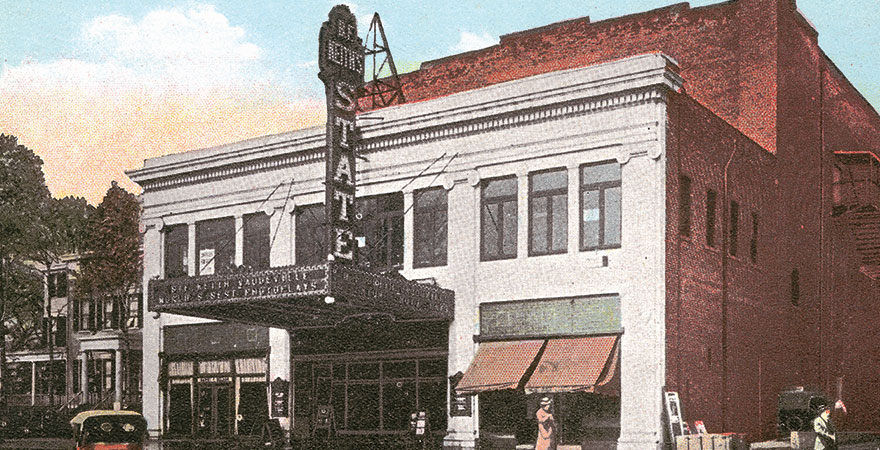 If you’ve walked past State Theatre New Jersey recently, you probably noticed our new marquee! Thanks to many generous early donors of State Theatre New Jersey’s Next Stage Campaign, two new, full-color LED marquee panels went up in January and replaced the 3,070 incandescent lightbulbs used in our old marquee. This improvement not only helps make STNJ more sustainable and energy efficient, but also adds to the vibrancy of the downtown New Brunswick area. The new marquee is one of several throughout the past 99 years. As our façade has evolved, it has captured each distinct era of State Theatre history. 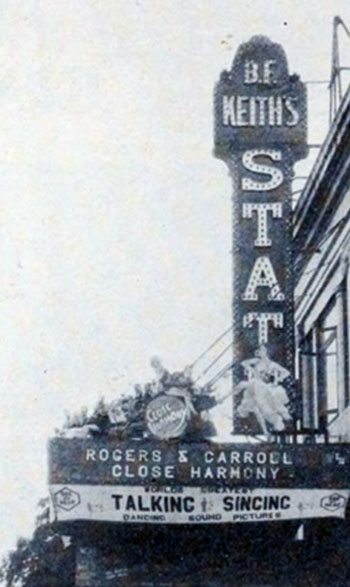 1929 photo of the marquee showcases B.F. Keith’s ownership on the “State” blade sign.

By 1928, Benjamin Franklin Keith and Edward Franklin Albee’s company, Keith-Albee-Orpheum (KAO), merged with the Joseph P. Kennedy’s Film Booking Offices of America (FBO) under the control of the Radio Corporation of America (RCA) to create the Radio-Keith-Orpheum (RKO). RKO then operated State Theatre primarily as a movie palace, beginning in 1930, for the next 40 years. In fact, State Theatre still maintains the original brass RKO signs flanking its entrance doors. 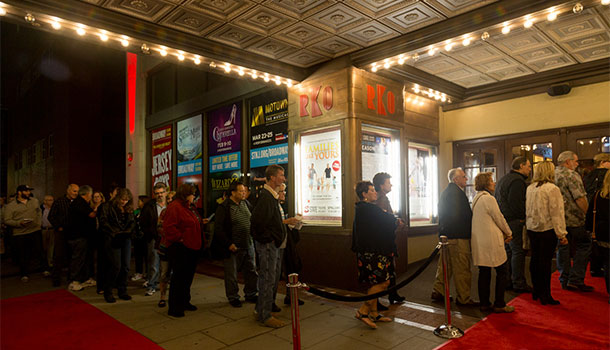 RKO insignia visible at the opening of Jersey Boys in October 2017. © Jeffrey Auger
; 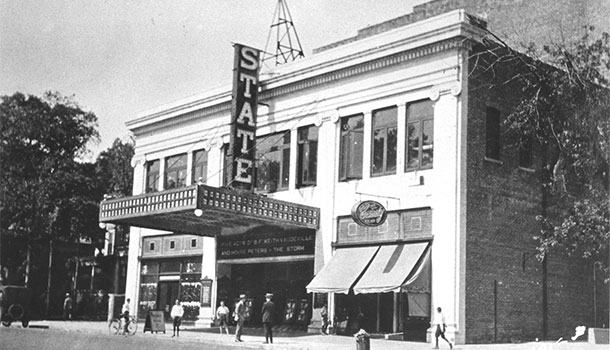 The B.F. Keith crown of the marquee was removed as a result of management change. 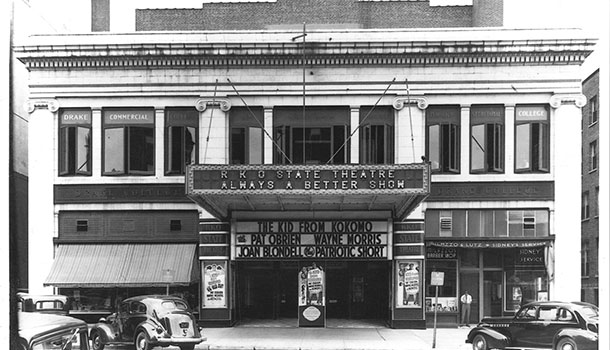 1939 marquee. The entire blade sign was taken down under RKO management. 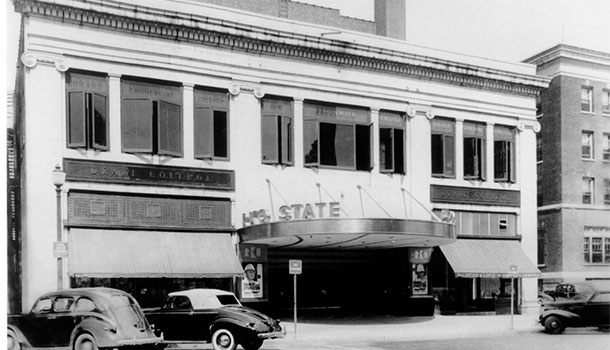 Shortly after, RKO began what is considered to be STNJ’s first upgrade, changing the marquee’s shape to this round one, with RKO STATE in large letters above both sides of the overhang. 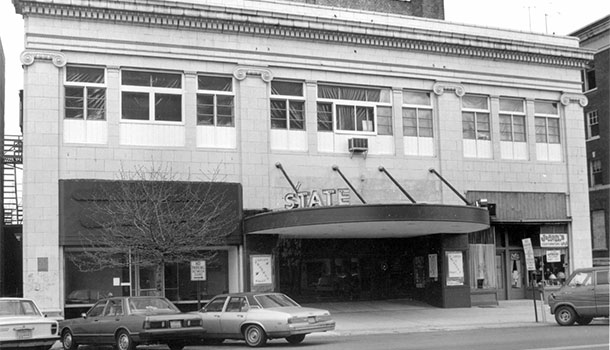 When RKO no longer managed the theater, the RKO letters were removed from above the marquee.

State Theatre New Jersey changed owners in 1970 and the historic building fell into disarray. Later that decade, the building was purchased by the New Brunswick Development Corporation (DEVCO) as part of the city’s revitalization efforts. In 1986, the ownership changed again and STNJ became part of the New Brunswick Cultural Center. Under this new leadership, renovations began. 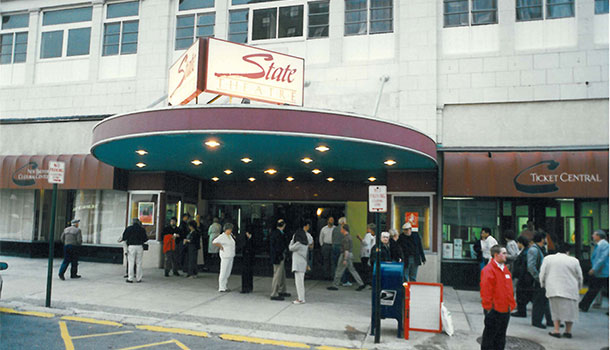 State Theatre New Jersey following the 1988 renovations, including a maroon and turquoise color scheme and signage with new logo.

The round marquee was replaced with the square one with incandescent lightbulbs in 1999. 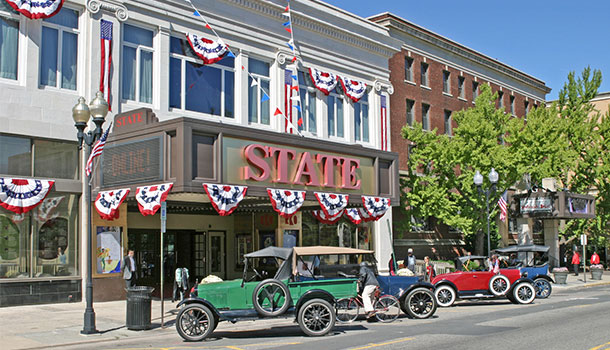 This was the 2004 grand opening following the restorative renovation.

Until now, the most recent renovation ended in 2004 when the building’s interior was restored as closely as possible to its original Thomas Lamb design. 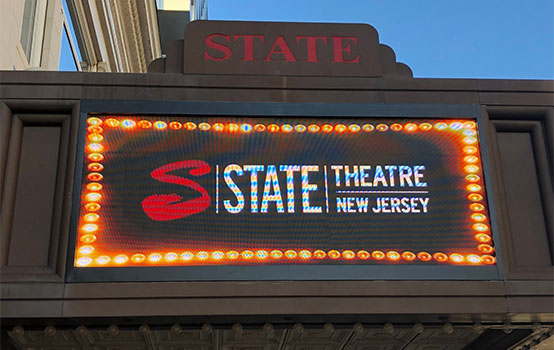 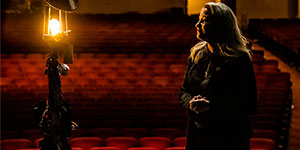 100 Years of Memories—Moving to The Next Stage 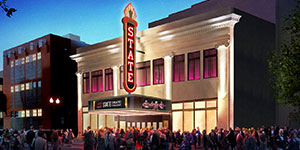