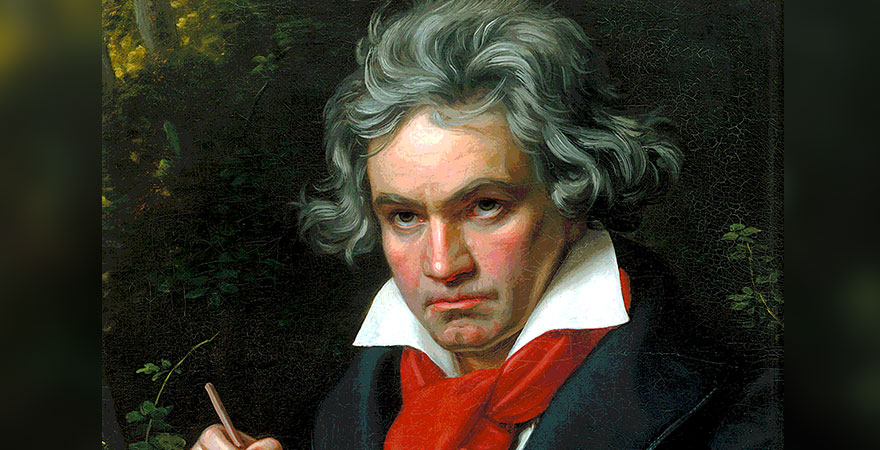 This year we celebrate Beethoven’s 250th birthday. Although he is a household name for his  accomplishments in classical music, there are some things that you many not know about german composer and pianist, Ludwig van Beethoven.

Beethoven's body of work  spanned from the classical period to the romantic area. Although the exact date of his birth is unknown, scholars believe he was likely born December 16th, which is when his birthday is celebrated globally. He is considered to be one of the greatest musical geniuses of all time. The first four  notes of one of his most famous works, Symphony No. 5 is  said to be the world’s most recognizable melody. Listen to Symphony No. 5.

If you’re wondering why those notes are so recognizable to you, it may be a subconscious memory back from elementary school music class days, but it also may be because Beethoven’s music is constantly featured in television and film. For instance, his Symphony No. 9 alone can be heard in such films as A Clockwork Orange, Dead Poets Society, Die Hard, and Cruel Intentions.

So now that we’ve caught you up on his major works, another important thing to know about Beethoven  is that during the course of his life, Beethoven became completely deaf. At the age of 26, he began to hear a ringing in his ear, and by the age of 44, he had nearly lost all of his hearing. But this was not the end of his career. On the contrary, most of Beethoven’s famous works, including the two symphonies previously mentioned, were produced after his total hearing loss! This begs the question—how did he do it?

Beethoven’s hearing loss was a gradual process. When his hearing loss began he had a more difficult time hearing higher frequencies and an easier time hearing lower notes, which caused a lot of his symphonies to be composed in a lower range. As his condition worsened, he would sit at his piano, put a pencil in his mouth, and touch the other end to the soundboard in order to feel its’ vibrations. He began to recognize the notes for their vibration, and in his later and more famous works, any higher notes he composed were solely from imagining the melodies he created.

Although Beethoven continued to perform, he would often either play the notes so hard he broke pianos, or so softly audiences couldn’t hear. When he composed Symphony No. 9, he insisted on conducting himself, but had composer Michael Umlauf assist him. Legend says that after the symphony concluded and the audience erupted into applause, Umlauf had to turn Beethoven around so he could see the applause he couldn’t hear.

250 years later, Beethoven’s music is still as relevant as ever. His works have been performed  countless times all around the world since his death, and this year there have been some particularly special performances to celebrate.

Pianist Adam Golka took on the task of playing all 32 of Beethoven’s sonatas, to celebrate his 32nd birthday which coincides  with Beethoven’s 250th. In his YouTube series, each sonata includes a corresponding conversation and features an array of special guests. Here is Adam Golka's performance and conversation of Beehoven's Opus 2.

Beethoven’s symphonies continue to flourish with new recordings all the time. Read The Los Angeles Times recent article "It's Beethoven's 250th birthday. Our critic's guide to the best new recordings."