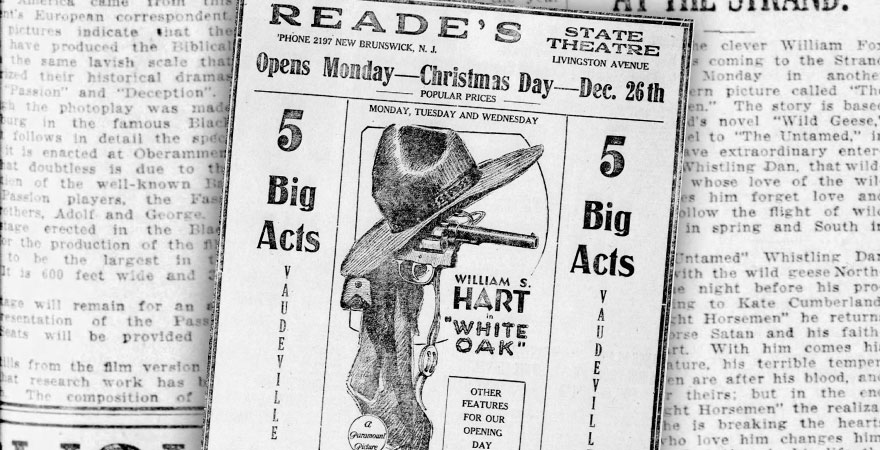 The Gem on Livingston Avenue

December 26th, 1921 must have been an exciting day when the greatest theater in New Jersey opened in New Brunswick. It was grand and the handsomest one in the state and Walter Reade, theater manager, touted via an ad in the Daily Home News that it was “the most important event in the City of New Brunswick in recent years.” He was the one who conceived the idea of it. Ticket costs were 10, 20, and 30 cents in the afternoons, and 30 and 50 cents in the evenings; the loges in the front of the balcony went for 75 cents.

The matinee audience on the first day was treated to a live orchestra concert and a tenor rendition of “The Star-Spangled Banner.” The day’s events included silent film White Oak, a western melodrama starring cowboy hero William S. Hart; five vaudeville acts; a newsreel, and a nature film. The theater placed an advertisement in the Daily Home News the next day thanking the community for its overwhelming support and apologizing for not being able to accommodate everyone, indicating the house was full.

One of the patrons who did get a ticket, the first one, was nine-year old Victor Levin of Paterson Street. He must have been awestruck when he saw the huge mural adorning the wall. A blend of Grecian, Roman, and Egyptian themes it was a tribute to art, particularly performing art. In addition to the mural, the marble, tile, and dome, all added to the grandeur of the gem on Livingston Avenue.

Prior to the theater’s opening, a name contest open to the public with passes and cash prizes was announced. Reade’s State Theatre was chosen and would eventually become  State Theatre New Jersey. The theater hosted live performances since that day 100 years ago and then in 1988, it became a live performing arts center.

Thomas W. Lamb, one of the most accomplished theater architects at that time, designed the theater—one of the biggest, most lavish, and modern ones in the region. Other theaters in New Brunswick included the Rivoli and Opera House. The venues coexisted and together they provided different entertainment options for the public, similar to the city’s vibrant theatre district today.

The Home News’ motto at the time was New Brunswick is the Hub of New Jersey–Watch it Grow, a harbinger of things to come. Since 1921, New Brunswick has transformed and along with it, State Theatre New Jersey. The theater is undergoing renovations and some of the changes include a salute to its roots with art deco motifs. The big dome from the beginning and the chandelier which was installed in 2004 will remain. The past will meet the present as patrons will be as amazed as Victor Levin was on that first day so long ago. 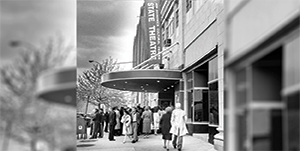 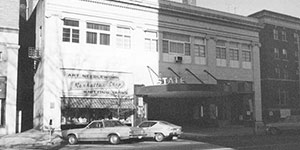