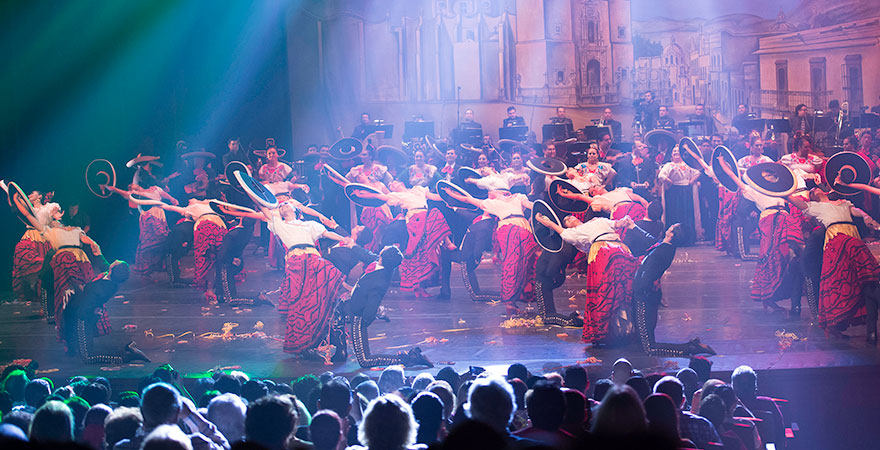 Discover the Mexican Culture of Ballet Folklórico de México de Amalia Hernández filled with colorful costumes, intricate dance moves, and a story that goes beyond performances. Founder Amalia Hernández's legacy lives on in this captivating folkloric dance company that brings intricate choreography and the art of dance to thrill audiences worldwide. Ballet Folklórico is coming to the State Theatre on Thursday, February 17, 2022!

Founded in 1952, Ballet Folklórico created by Amalia Hernández, started out as a small dance workshop with only eight members. Over time, Hernández blossomed the company to showcase and choreograph works of art into over 40 ballets for a company of 76 dancers. They have traveled and performed all across Mexico and the U.S. The company's performance rich in Mexican folklore brings together dance, music, and costumes from pre-Columbian civilizations through the modern era.

Hernández's tribe of eight dancers became a hit for this creativity in Mexican folklore when they were spotlighted in a television program known as Function de Gala around 1958, sponsored by the president of television in Mexico. Creating new routines that aired weekly, the company grew into an attraction they did not think was possible.

Much of the  choreography is influenced by Mexican history. Representing authentic Mexican culture, multiple dances pay tribute to women's roles in the early 1900s or the religion of pre-Hispanic worship. Other aspects of culture are also portrayed in the ballet such as arts and crafts, puppetry, dazzling costumes, and the empowering music to represent identity and expression.

Hernández passed away in 2000, but her vivacious and vibrant legacy lives on through Ballet Folklórico and under the direction of  her daughter Norma López Hernández and her grandson Salvador López. The company continues to move audiences with "gorgeous costumes, and breathtaking formations [that] keep coming, dance after dance" says The New York Times.