We are kicking off our yearlong celebration by collecting and sharing personal stories related to the State Theatre from patrons, donors, staff, community leaders, and more. 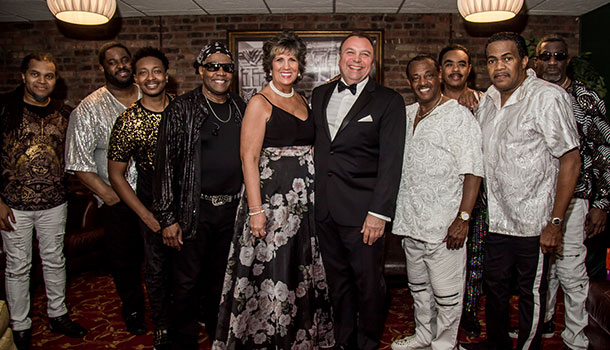 As a child, I actually performed at the State Theatre! I remember: it was 1972 and I was 12 years old. I was in the baton twirling club and we performed in an arts festival on the State Theatre stage. I wore a full white leotard. Years later, when I worked for Johnson & Johnson, I found myself organizing the annual J&J stockholders meeting. I was backstage, near the dressing rooms, and I had a flashback to 1972 and my baton twirling instructor telling me where to stand and what to do. It was a déjà vu moment. I'll always remember that day. (Linda Piscadlo and Bob Tami pictured backstage with Kool & The Gang at the State Theatre New Jersey 2018 Benefit Gala. ©Jeffrey Auger) 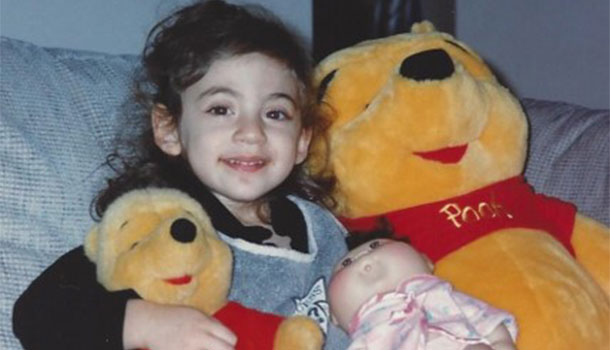 I’ve been bringing my daughter, Liz, to State Theatre New Jersey ever since she was three-years-old, and now she’s 27. I remember distinctly the first show we saw together. It was an adaptation of Winnie the Pooh on January 12, 1997 performed by a theater for the Deaf, and it was mesmerizing. Every character signed his or her lines, and also had a counterpart on stage who spoke the lines for those of us who did not understand American Sign Language. The only character who did not have any spoken lines was Pooh. Seeing the characters sign never even phased little Liz. She, my husband, and I were sitting in the balcony, house left, just behind the balcony rail. Liz sat transfixed, almost leaning over the rail. We had to hold on to her, to make sure she didn’t fall. When the show was over, all Liz could do was say, “Again!” I had to explain to her that this was not a video that I could just play over again! It was an inspiring introduction to the performing arts that neither of us will ever forget. We return to the State Theatre every chance we get. 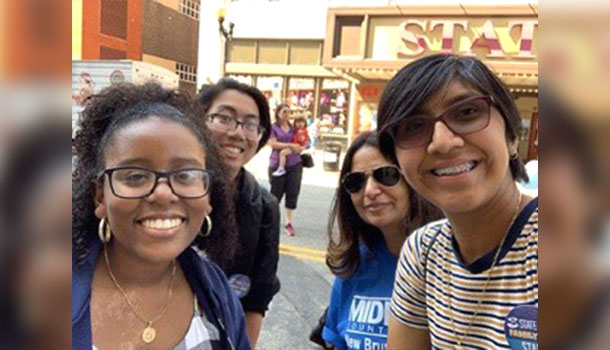 The first time that I brought the Middlesex County College E.M.P.O.W.E.R. students to the State Theatre was for the Scientists Exploring the Arts program. It was the first year we started the college mentoring program and it was great to bring both college and high school students—who were science majors or considering a science—to an arts experience with dinner and a show. After that, our students began volunteering each year for STNJ’s big Family Day, which was a lot of fun for them. One of the most heartfelt experiences for me because of the collective work, was working in partnership with State Theatre, the city of New Brunswick and PRAB, the lead agency organizing the Juntos Together initiative. It was a documentary screening at the State Theatre and a community fundraiser to support the rebuilding of homes of first responders in Puerto Rico after the damage from Hurricanes Irma and Maria. 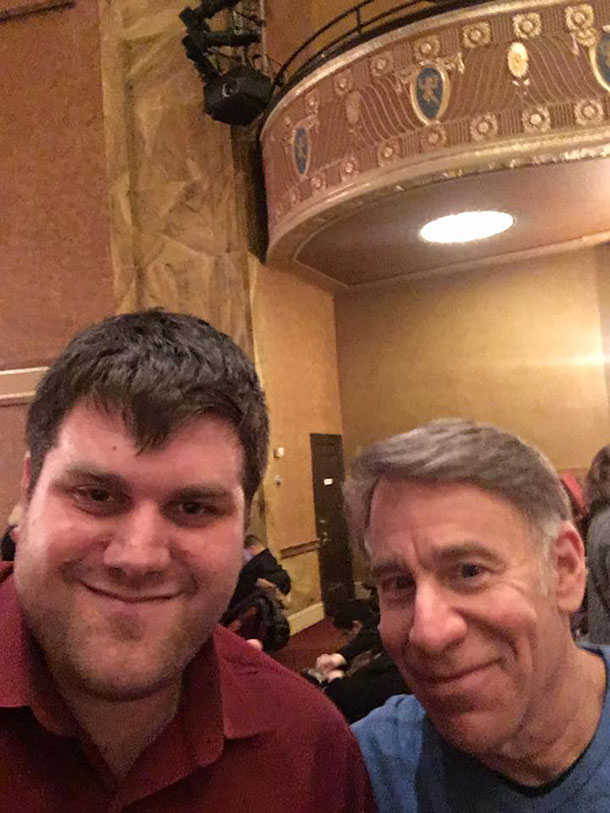 For years, I have been attending the Broadway tours that play at State Theatre New Jersey. I've noticed that members of the creative teams of the musicals that come to New Brunswick will often take a trip out to State Theatre to see the show in action; in some cases, this is the first time they may be seeing the tour's cast that we are seeing. One day in March 2017, when the national tour of the Broadway revival of Pippin was playing at State Theatre, I was sitting on the bench in front of the theater, as I often do, and I noticed someone with a familiar face walk past, but I couldn't place him. It was only later, while we were both seated in the orchestra waiting for the show to start, that I realized that face belonged to Stephen Schwartz, who in 1972 wrote the music and lyrics to Pippin, along with a host of Disney films and numerous other Broadway musicals during his long career, including the 2003 hit Wicked. He seemed to be really enjoying the show, and I couldn't help but ask him for a photo at intermission. He seemed genuinely surprised that he was recognized on a night out at the theater in New Jersey, but he gladly posed for a photo. 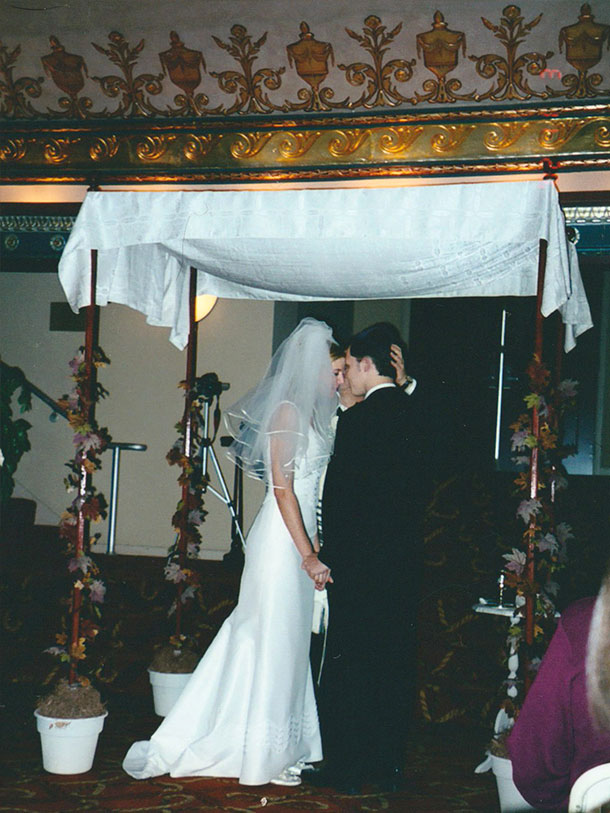 I met my husband Joshua in October 1999 at an historic theater in Columbus, Georgia, where I was the Marketing Assistant. He was an actor from New York performing at the theater. After dating for several months, I found myself job hunting in New Jersey and soon moved north to be closer to him. In 2001, I was hired as a Marketing Communications Specialist by the State Theatre and fell in love with the beautiful building. It reminded me so much of the theater where Josh and I had met, that when he proposed, we knew exactly where we would be married. The ceremony was held in the second-floor Heldrich Room on November 3, 2002. Since then, I have been lucky enough to work at this wonderful theater that I consider my home. Our two sons were born in New Brunswick and have been raised here, from enjoying Milk & Cookies events and seeing Thomas the Tank Engine Live to programming such as RENT and Chicago. I've loved watching the theater change through the years and can't wait to see what it has in store for my family in the future. 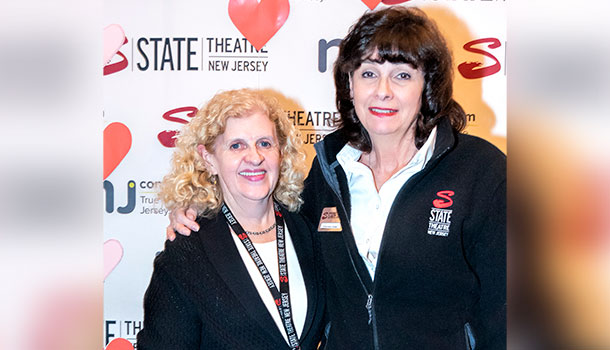 Immediately following his first performance at State Theatre New Jersey in 2013, Peter Noone from the popular '60s band Herman’s Hermits was scheduled to sign autographs in the lobby, where I was a volunteer usher. However, once he was in position, he realized that he had no pen, and a crowd was gathering. His manager asked me if I had a pen. I got so excited that I put my arms straight out with my palms facing him and yelled, “Stay there!” I then ran like a maniac upstairs to the ushers’ room, dumped out the contents of my purse, grabbed a pen and ran downstairs. (From left: Toni Unger and Diane Palmer at Boyz II Men in February, 2020) 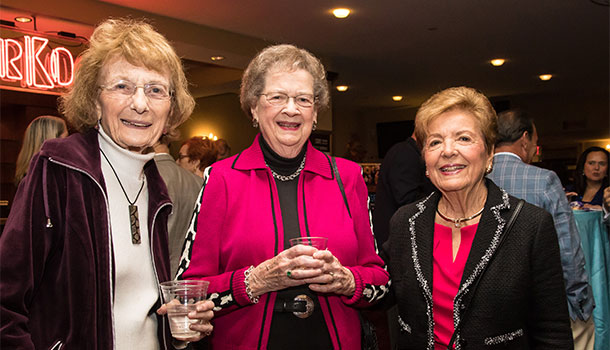 Donna Walcott's most memorable symphony experience was a concert at the State Theatre on April 25, 2001. It was the Baltimore Symphony Orchestra conducted by Yuri Teminkanov. The soloist was an unknown 17 year old Chinese pianist named Lang Lang playing Grieg's Piano Concert. When he finished, the entire audience leapt to their feet as if there were springs in their seats. Lang Lang was very shy and spoke little English. He took curtain calls but kept trying to leave the stage. The conductor stayed in the background but kept pushing Lang Lang back for additional curtain calls. (From left: Midge Golin, Donna Walcott, and Joan Campbell at the 2018 President's Council Dinner ©Mary Brown)

State Theatre was built in 1921 as a silent film and vaudeville palace. Recognizing the historic significance of the theater, PBS honored State Theatre New Jersey by featuring it in its documentary series, Treasures of New Jersey, in the fall of 2018. Treasures of New Jersey: State Theatre New Jersey can be streamed here. Today, State Theatre is the largest performing arts center in Central New Jersey and has welcomed over 5.9 million people through its doors since reopening as a non-profit performing arts center in 1988. The State Theatre is a cornerstone of the cultural vitality of Middlesex County, and averages a total economic impact on New Brunswick and the surrounding area of more than $18 million a year. The mainstage programs have featured high-caliber artists such as Diana Ross, Tony Bennett, Kevin Hart, Ringo Starr, Melissa Etheridge, John Leguizamo, Harry Connick, Jr., Diana Krall, and Crosby, Stills & Nash. Program offerings include Broadway, orchestra, family, dance, comedy, rock/pop, jazz, Performances for Schools, and Sensory-Friendly Performances.