'TIS THE SEASON OF GIVING!

Make a tax-deductible donation by Dec 31st and help State Theatre continue to provide inspiration and entertainment through the power of live performing arts!  DONATE NOW >

This show is part of STATE THEATRE NEW JERSEY’S CENTENNIAL SERIES, celebrating our 100th Anniversary in the newly renovated theater! Learn more about the renovations and other Centennial Series shows here »

In An Evening with Itzhak Perlman, violinist Itzhak Perlman shares the story of his life and career through anecdotes, musical pieces, and personal photos from his archives. It is a first-ever experience for audiences to learn more about the extraordinary 13-year-old boy who became a household name over 60 years ago after his debut on The Ed Sullivan Show.

Perlman has been honored with 16 Grammy® Awards, four Emmy® Awards, a Kennedy Center Honor, a Grammy® Lifetime Achievement Award, a Genesis Prize, a National Medal of Arts by President Clinton, a Medal of Liberty by President Reagan, and a Presidential Medal of Freedom by President Obama, which is the Nation’s highest civilian honor. 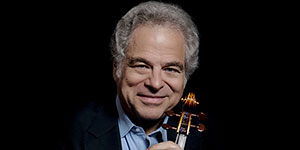 A look into the life of a superstar violinist Itzhak Perlman

This show is recommended for ages 10+. Everyone, regardless of age, entering the theater must purchase a ticket. Child seating policy details.

State Theatre has implemented important guidelines to protect the health of our guests, staff, artists, and crew. Also, State Theatre presented performances are exchangeable for another performance or for credit on your State Theatre account that can be used towards a future performance. If an event is postponed, rescheduled, or cancelled due to COVID-19 containment efforts the original purchaser will have several options, including a full refund. Please note: exchanges or credits are not allowed for an event once a patron has arrived at the theater for the event. Full details »